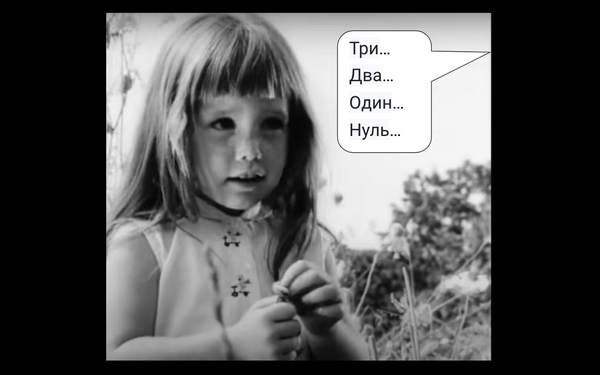 I created the image above for a February 26 post on my personal blog as part of a memoir about my years covering how threats of nuclear war have been used in political media and marketing.

I'm repurposing some of it here, because nearly two weeks later it seems clear that Russian President Vladimir Putin has begun spinning the unspinnable, and is using the threat of nuclear war, at least to some extent, as part of his information war against Western Democracy. And if the past is prologue, it will probably work.

While it's supposed to be the unthinkable, much less spinnable, the allusion of nuclear war has been proven to be one of the most persuasive arguments for political outcomes.

And I can't help wondering if Putin isn't taking a page out of the playbook of another political media mastermind -- Ronald Reagan and his advisors -- who parlayed a similar threat, ironically, into the dismantling of the former Soviet Union that Putin appears to be trying to recreate via the very same leverage.

Like Schwartz's "Daisy" spot for LBJ, it was legendary ad man Hal Riney's "Bear In The Woods" spot for Reagan's 1984 reelection campaign that is credited for his crushing victory over Democratic challenger Walter Mondale, because we were at the height of the Cold War and many Americans feared a dovish leader would appear too weak in the face of the Soviet threat.

“For some people, the bear is easy to see. Others don’t see it at all,” Riney's voice intones as the narrator of the "Bear" spot, continuing: "Some people think the bear is tame. Others say it’s vicious and dangerous. Since no one can really be sure who’s right, isn’t it smart to be as strong as the bear? If there is a bear.”

The spot fades to a picture of Reagan and the slogan “Prepared For Peace.”

I broke the story that Reagan was planning to use that spot while covering the campaign for Adweek, but I had to sweat it out for weeks until the spot finally aired, because, you know, sometimes campaigns change their strategies and tactics.

When the spot ran, it had the effect you might expect, and afterward, Riney gave me an interview about it. I spoke to him on the phone, while he was sitting in a bar in San Francisco doodling who knows what Big Ideas on cocktail napkins.

When I asked Riney what his inspiration was for creating the "Bear" spot, he said almost exactly the same thing Schwartz told me years earlier when I interviewed him about his inspiration for LBJ's "Daisy" spot: That all he was doing was tapping into a fear people already had inside their heads.

While the "Bear" was arguably a little less heavy-handed than "Daisy," the ad gurus told me the same thing -- that humans are hard-wired for existential threats that confront them in the here and now. (Unfortunately, I would learn years later that the same mechanic doesn't work for existential threats that are a little more far off in the future, like climate change. But that's another story.)

The rest is history, literally.

Reagan handily won his reelection, and leveraged his strong defense sentiment as a mandate to fund the U.S. military build-up that ultimately broke the bear, as well as the Soviet Union.

And I can't help wondering if Putin isn't using that tactic in reverse in order to reconstitute it.

Obviously, only Putin knows how much of that threat is real or media spin, but I did ask a sample of average Americans what they thought, and according to a survey conduced Tuesday, courtesy of Pollish, only a quarter think he's bluffing, while two thirds think he's serious and/or crazy. 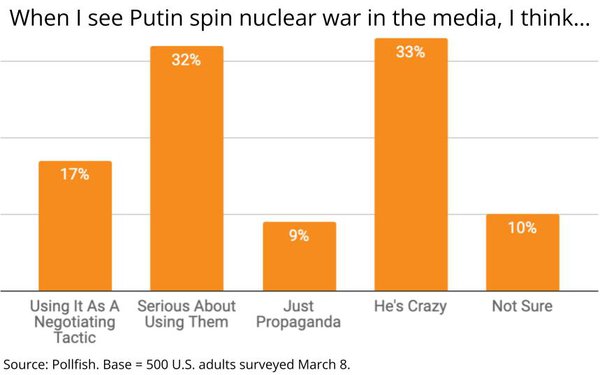