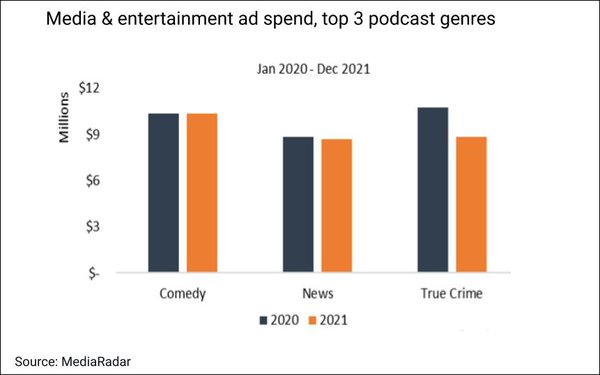 The top 500 podcasts across three dominant genres saw a 20% year-over-year increase in advertising revenue in 2021, according to a new MediaRadar analysis.

The number of companies buying podcast ads rose 14% YoY, and 42% of those who advertised on the platform in 2020 returned in 2021.

While media and entertainment continued to be among the top- product/service categories across the true crime, news and comedy genres, its spending levels decreased from the pandemic-driven stay-at-home promotional surge levels of 2020.

The category’s spending dropped 18% in true crime and slightly in news, and spend in comedy was flat (chart top of page).

Tech advertising also continued to be a top-spending category across the genres, and saw robust 50% YoY growth overall. The growth was driven by cellular providers, who increased their ad buys by nearly eight times compared to 2020. 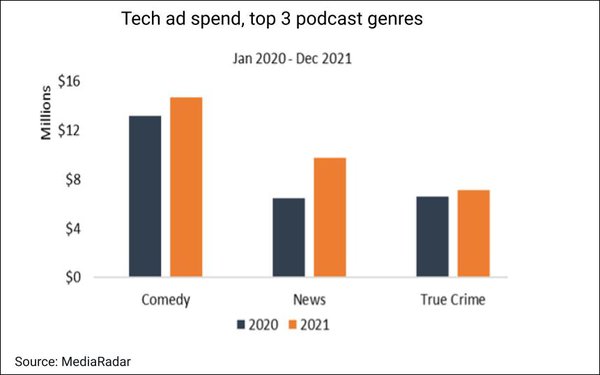 The true crime genre as a whole saw 15% growth in ad revenue, drawn from more than 1,000 product lines. Psychology and counseling services were the top advertising categories, up 57% versus 2020. One service, BetterHelp, upped its spend by 41%. Home security companies were also major spenders this podcast genre.

Overall ad revenue in the news genre rose 20%, driven by a 36%  increase in the number of brands advertising, to 1,400. Financial advertising spend rose 45%, including a combined 212% increase in credit-card advertising by Bank of America, Capital One and American Express. Spend by banks and investment firms rose 18% and 17%, respectively.

Total spend in the comedy genre increased 20%, reflecting a 26% increase in the number of companies advertising.

Format-wise, host-read ads saw a decline in use. They represented just 35% of ads in the news genre, and their share of total ads declined from 82% to 66% YoY in the comedy genre, and from 73% to 59% in the true crime genre. 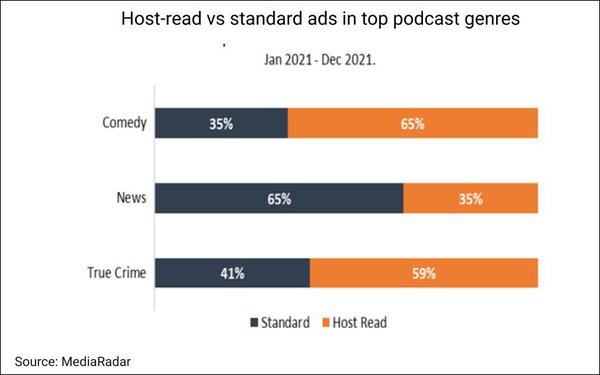 In terms of positioning, mid-roll has the dominant share across the genres, with true crime at 58%, news 56% and comedy 52%.

News podcasts have by far the shortest ads: 47% are 30-second formats. In contrast, 60-second-plus ads account for 57% of ads in both the true crime and comedy genres.