More Than Half Of U.S. Broadband Households Now Own Smart TVs 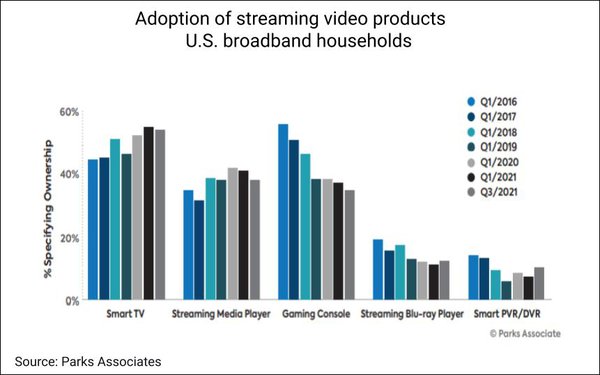 Smart TVs are well on their way to becoming the default connected streaming platform.

Fully 55% of U.S. households with broadband had at least one smart TV as of Q3 2021, according to a report on OTT platform diversity from Parks Associates.

Smart TVs are viewed as must-have devices by a growing number of U.S. homes, and they are the only streaming video product category to have risen in adoption continually throughout the pandemic.

“Consumers are increasingly interested in having all their entertainment available on a single device, and as smart TVs have become more affordable, with improved user interfaces, they offer an attractive integrated option for viewing all content,” the researchers point out. Using a connected TV eliminates the need to navigate HDMI ports, inputs, and wires.

Although U.S. consumers still own a variety of standalone streaming devices — with nearly 72% owning at least one such device — the number of standalone connected devices will continue to decline as smart TVs cement their dominance.

Streaming media players are now the second most-used streaming device, but their adoption rate was down to under 40% as of Q3 2021.

The trend has also been clear in sales data. For instance, the Roku hardware/player division saw its revenue drop by 26% year-over-year in that quarter.

Gaming consoles, which boasted a nearly 60% adoption rate as of Q1 2016, are now slightly below streaming media players’ rate, although they held their own last year, after several years of decline.

Streaming Blu-ray players and smart PVR/DVR devices have adoption rates of 10% or lower.

Samsung's Tizen smart TV platform is among the most widely used connected entertainment platforms in the U.S. — on par with Roku, with 27% of all broadband subscribers citing the Tizen as their primary device for consuming video content as of Q3 2021.

But with devices increasingly determining streaming services’ ability to grow their subscribers and ad revenue in the U.S. and other markets, and smart TVs clearly the dominant device going forward, new players looking to accelerate their streamers’ expansion are attempting to join the smart-TV fray.

Amazon and Comcast both released their own smart TVs in last year’s second half.

Although they’re late to the game, Amazon’s size, distribution and partnership leverage will make its two lines of Fire TVs serious contenders, and Comcast’s Sky Glass is a cutting-edge offering promising total integration of hardware, software and content.

Of course, with all of the players noted above plus LG, Sony, TCL and Google, among others, now engaged in the battle for share, consolidation is also inevitable at some point.

In the meantime, we can watch and mark our scorecards.