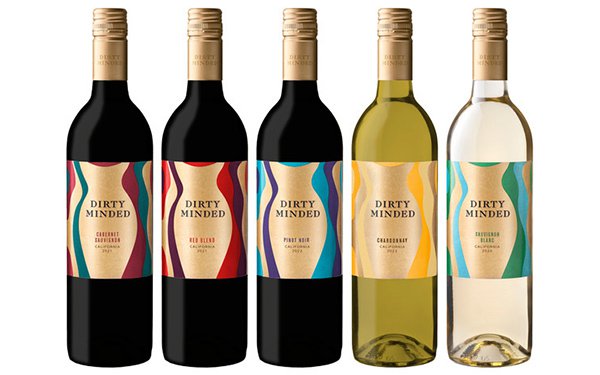 If you assume a new wine brand called Dirty Minded is designed to appeal to, well, the dirty minded, consider that it may instead just be targeted to those with dirt on their minds: namely, environmentally conscious millennnials and Gen Z-ers who care about the California soil where Dirty Minded’s grapes grow.

This, despite the wine’s admittedly cheeky name and sexy package design, is the positioning developed by Affinity Creative Group for Raventós Codorníu, a nearly 500-year-old Spanish-based winery. Affinity also came up with Dirty Mind’s packaging and name, which it describes as an “edgy and clever double entendre.”

A sauvignon blanc version is now available, a cabernet sauvignon version is set for May, and other varietals are on the way, judging from the image above.

While Raventós Codorníu is best-known for its Spanish Cava sparkling wines (Josep Raventós himself created the first Cava in 1872), Dirty Minded is strictly an American product right now, although Berkey says that “we have received requests from several European countries who are interested in importing the brand.”

The brand, meanwhile, is being distributed nationally in the U.S., Berkey said, with an ecommerce presence scheduled to be added within the next month.

Raventós Codorníu North America has also launched a wine called Blank Verse, said to be inspired by “metered poetry without rhyme." It’s now available in chardonnay, with a pinot noir coming in May.

The company entered the U.S. in 1991 when Raventós Codorníu founded the Artesa winery in Napa. Artesa offers dozens of wines in several varieties.

The Spanish parent company, meanwhile, launched an American version of its D2C store, 15Bodegas.us earlier this month. It currently offers 16 Cavas and wines from five of the company’s Spanish wineries and one Argentinian winery.