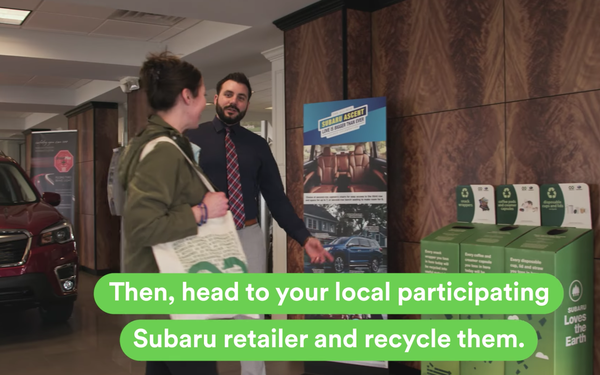 Subaru of America is expanding its commitment to protect the environment with a recycling program through its dealers.

As part of the expanded efforts, more than 48% of participating Subaru retailers will open their Zero Waste Boxes to their local communities and allow outside waste to be brought to their storefronts for recycling, and more than 40% will recycle hard-to-recycle items from their service lanes, including flexible new car plastic and used cabin air filters.

Through TerraCycle partnership, the automaker and retailers already have diverted 6 million pieces of hard-to-recycle waste from landfills nationwide.

The expanded effort was announced in conjunction with Subaru Loves the Earth month in recognition of Earth Day, which is April 22.

“Our retailers are helping Subaru of America live our mission to make the world a more sustainable place by keeping hard-to-recycle waste out of landfills,” Bethke says in a release.

Recycling collection will take place at Subaru retailers throughout the calendar year and, once collected, the waste can be transformed into recycled products that benefit local communities, including park benches, picnic tables and playground materials.

The automaker has created a dedicated website detailing the effort, and is posting about it on social media with the hashtag #SubaruLovesTheEarth to show the initiative in action.