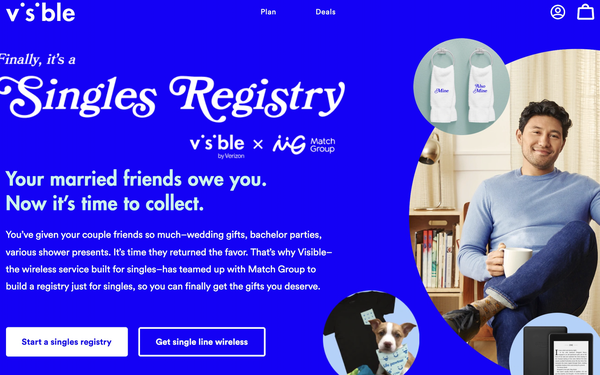 “Nix the nuptials. Still get the gifts.”

When last we checked in, Visible was touting family-plan-type savings for singles as holiday season approached. Now, with wedding season on the horizon, the service has teamed up with a fellow singles-focused brand -- dating app giant Match Group -- to turn gift registries on their head.

Instead of singles giving the gifts, they’re receiving them!

“Your married friends owe you. Now it’s time to collect,” declares the Singles Registry, which was co-created by both brands and the Madwell agency.

Running through April 30, the registry features such gifts as: "Mine" and "Also Mine" tea towels; single-serve coffee machines, wine glasses and kitchenware; matching merchandise for singles and their pets; a “Pamper Yourself” spa kit; a foldable one-person kayak; and free premium memberships to Match Group’s Tinder, Plenty of Fish, and OKCupid.

“Many of us have had that moment where you just say to yourself, ‘not another shower gift!’” said Melissa Hobley, chief marketing officer of OkCupid, in announcing its participation “to help singles feel more love.”

OK, so the Singles Registry has wedding-type gifts covered. But singles still can’t go on a honeymoon, so the new registry will allow users to enter a “singlemoon” sweepstakes, with the winner getting a $550 Airbnb gift card.

Visible’s target age demo is 25-44, chief marketing officer Cheryl Gresham told Marketing Daily, but the Registry “is really for anyone who can identify with this experience…males and females, regardless of age. We have plenty of items for single men on our registry, too!’

As part of this campaign, Visible is donating $10,000 to Girls Who Code, an international nonprofit working to close the gender gap in technology.