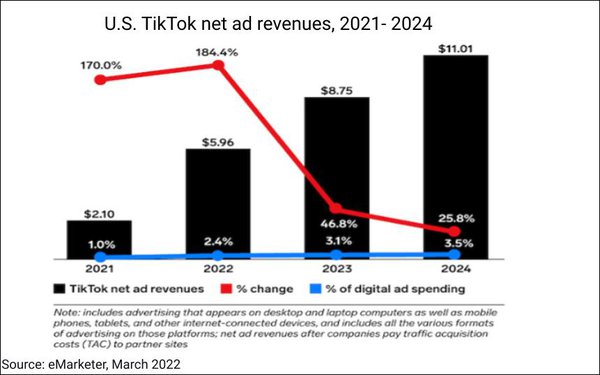 TikTok’s net U.S advertising revenue will leap by 184.4% this year, to $5.96 billion, from $2.1 billion in 2021, according to the first TikTok ad revenue forecast from Insider Intelligence’s eMarketer.

That will put the U.S. at 51.2% of projected worldwide TikTok ad revenue for the year.

The growth will give the social video platform a 2.4% share of the projected nearly $250-billion U.S. digital ad market — more than the combined U.S. ad revenues for Twitter and Snapchat, and just 1 percentage point shy of YouTube.

Those platforms will still fall far short of Google and Meta, whose 2022 shares of the U.S. digital ad market are projected at 28.2% and 22.3%, respectively

TikTok’s U.S. ad revenue is expected to settle into double-digit growth starting next year, and top $11 billion in 2024 – increasing its share of total U.S. digital ad revenue to 3.5%.

YouTube’s 2024 global ad revenue is projected at essentially the same level: $23.65 billion. That will put each company’s share of the worldwide digital ad market at 3.1%.

“TikTok’s user base has exploded in the past couple of years, and the amount of time users spend on the app is extraordinary,” commented Debra Aho Williamson, Insider Intelligence principal analyst. “It has moved well beyond its roots as a lip-syncing and dancing app; it creates trends and fosters deep connections with creators that keep users engaged, video after video.

“Advertisers want to reach a passionate, dedicated audience, and TikTok can deliver that,” she added. “Another factor that will drive growth in ad spending is TikTok’s unique take on social commerce. It pairs marketers with creators to help content go viral, and that can drive enormous demand for products that advertisers want to promote.”

TikTok has surpassed Meta’s Instagram in popularity among U.S. teens — the demographic that drives most ad spending — while just 3% say they prefer Meta anchor platform Facebook, according to the latest Piper Sandler teen survey.