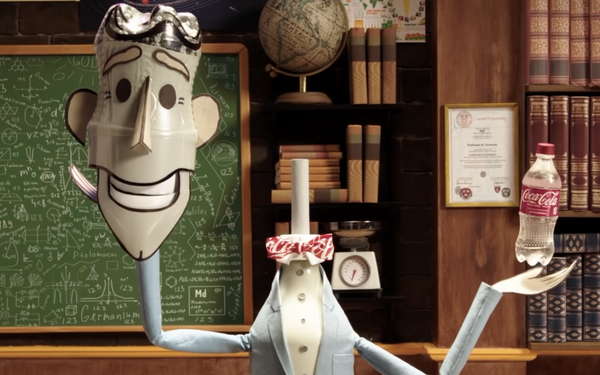 With Earth Day about two weeks away, Coca-Cola has released this video starring Bill Nye, who says that “together we can close the loop” on waste.

The video, by Mackinnon & Saunders, discusses “Creating a world without waste,” and an animatronic version of Nye talks about how we can reuse plastic. “It’s an amazing material,” he says.

What Nye doesn’t talk about is how Coca-Cola produces 3.3 million U.S. tons of plastic packaging per year, according to The Hill. Nor does he discuss how over recycling’s 60-year history, less than 10% of plastic that has been produced has ever been recycled, according to Greenpeace.

The reason, according to PBS Frontline and NPR, is that making new plastic is cheaper than recycling the old stuff.  And while Nye attempts to close that loop, Coca-Cola will apparently keep polluting and try to convince the public that it’s taking the environment seriously.