Paramount Makes Miniseries About 'The Godfather' 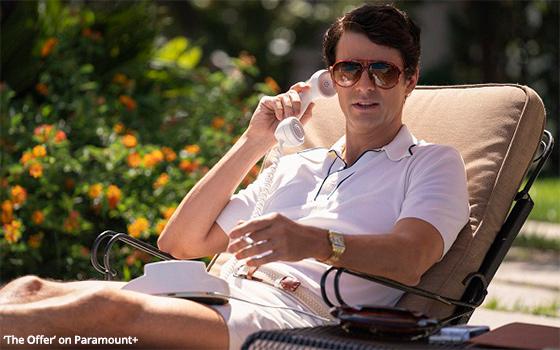 ViacomCBS -- now Paramount Global -- has ventured into the vault of its own history to tell the story of the making of “The Godfather” in a new scripted series.

The 1972 movie and its 1974 sequel -- both winners of Best Picture Oscars -- represented a high-water mark for Paramount, and for movies in general in the 1970s.

It was a decade filled with movies that are now considered classics, and Paramount made a number of them including “Chinatown,” “Paper Moon,” “Nashville,” “The Conversation” and “Apocalypse Now” (the latter two directed by “Godfather” director Francis Ford Coppola).

But of all the ’70s classics, whether Paramount’s or someone else’s, it is “The Godfather” and its sequel that have resonated most down through the decades.

This was likely the motivation behind this new scripted series drama premiering this week on Paramount+. Titled “The Offer,” this 10-episode, limited series traces the origins of the “Godfather” phenomenon through its development, production and release.

The series’ title was no doubt inspired by a phrase made famous in “The Godfather” -- “I’ll make him an offer he can’t refuse” -- that, if memory serves, is uttered twice (with slight differences) in the movie.

In the premiere episode of “The Offer,” we meet the principal players in the “Godfather” drama -- Paramount producers Robert Evans and Albert Ruddy (on whose personal experiences the series is based); Charles Bludhorn, the autocratic chairman of Paramount parent Gulf + Western; Coppola; and Mario Puzo, author of the best-selling “Godfather” novel and co-author of the “Godfather” screenplay with Coppola.

But nobody should hold their breath waiting for “The Offer” to win any awards. On the contrary, the series has a pedestrian, clichéd, low-budget air to it.

Moreover, and perhaps not too surprisingly, it feels inaccurate and, in various respects, downright fictional.

It is as if the makers of the series were not confident that the fascinating story of how “The Godfather” came to be could just stand on its own.

For starters, as the TV Blog has opined in the past when writing about period TV dramas placed in past decades, some TV shows succeed at bringing these long-dead eras to life and others do not.

“The Offer” is one of the latter. The TV Blog readily admits that this deficiency can be a little difficult to pin down.

Décor, cars, clothes, settings, locations, background music and bits and pieces of dialogue all go into bringing past decades to life in TV shows like this, but in “The Offer,” these elements just don’t gel.

Instead, the late-’60s/early-’70s time frame of “The Offer” plays like a version of those years that the show’s writers and producers have conjured from other TV shows and movies, and not from the real world.

In “The Offer,” producers swagger around calling each other “baby” like something you would see in a silly 1960s sitcom (such as when Jethro Bodine decides to dabble in the movie business in “The Beverly Hillbillies”).

In addition, everywhere these men go, they encounter “chicks” who just cannot wait to go to bed with them.

Portions of the dialogue heard in the show sound like they come from the present day, and not the early 1970s.

Music and cultural references seem to be a bit off too. As far as I can determine, the show starts out in 1968 or 1969, but certain pop songs chosen as background for some scenes do not seem to fit.

This feature of the series seems to have been borrowed from “Goodfellas,” which was a gangster classic whose music choices were right on the money.

Speaking of gangsters, “The Offer” has a subplot in which the leading lights of the era’s New York-based mafiosi are having attacks of acute agita over the “Godfather” book and then the movie when they hear that it is being made.

This may or may not be true, but in the series, this mafia story plays like it was tacked on just so the series could have a gangster story running in parallel to the story of this gangster movie.

And while we’re on the subject of New York, some scenes give the impression that the producers of “The Offer” couldn’t be bothered to come to New York to shoot at least some (or none) of their New York scenes.

Instead, they used a generic Hollywood backlot with imitation New York buildings that look as if they are made of papier-mâché.

Having said all that, there is one performance in the series that almost makes up for all of the show’s shortcomings, and that is actor Matthew Goode’s portrayal of Robert Evans (pictured above).

The best part of the actor’s performance is his uncanny and spot-on impersonation of Evans’ voice. Evans himself was always a larger-than-life character and Goode brings him vividly to life.

The first three episodes of “The Offer” start streaming on Thursday (April 28) on Paramount+.