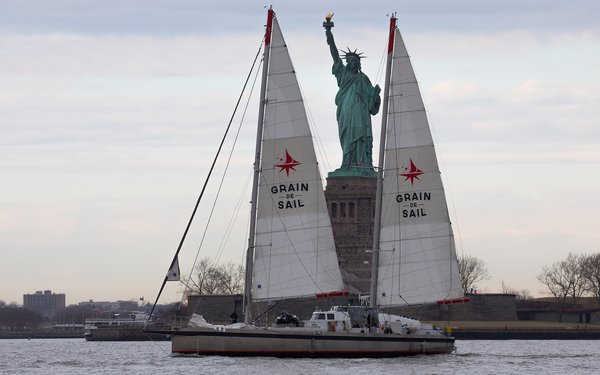 It’s a good year for Champagne anniversaries -- and for the category’s colorful historic personalities.

Recently, we wrote about a campaign celebrating the 250th anniversary of Veuve Clicquot, a brand oh-so-respectful of its namesake and mastermind, the widow Madame Clicquot.

Now, Charles Heidsieck will honor the 200th birthday of its own namesake founder, who earned the nickname of Champagne Charlie after his 1852 sailing from France to New York, which pioneered Champagne marketing in the U.S.

Recreating Champagne Charlie’s original voyage, an unspecified number of Charles Heidsieck Champagne bottles -- including a cuvée appropriately named Champagne Charlie -- are now on their way to New York via a three- to four-week sailboat trip.

To be sold through retailers and restaurants, as well as directly to “VIP wine collectors,” the shipment will help kick off “a number of marketing initiatives” timed to launch on the founder’s June 18 birthday, a spokesperson told Marketing Daily.

To really recreate the 19th Century experience, true wine aficionados might want to meet the boat when it docks in the New York area. Unlike folks back then, however, they can know exactly when the boat will arrive by following its voyage online at Grain de Sail.

This French company, which owns the world’s first modern regulated, merchant shipping cargo sailboat, launched its floating wine cellar in 2020 and makes two transatlantic trips a year. The boat holds at least 15,000 bottles of wine (and also handles coffee and chocolate on other legs of its voyage, but that’s a different story.)

Grain de Sail usually works with small independent wineries, which otherwise don’t sell in the U.S. It buys the wines in France and then does its own sales in New York City.

But it’s made an exception for the Charles Heidsieck shipment, the company’s marketing director Stefan Gallard told Marketing Daily. “In this case, Heidseick is shipping a special cuvee that would not already be available in the U.S.” he explained, and the Champagne company will “remain the owner of the merchandise and handle sales upon arrival.”

From a marketing sense, Gallard added, “the opportunity to take part in such a celebration with a storied Champagne house and special vintage couldn’t be passed up….Our partnership will allow us… to mutually benefit and gain visibility for both of us.”

Grain de Sail’s own marketing budget is small, Gallard note, “so I have to be quite creative and try to use the ship as a tool to bring people on board (literally and figuratively), and then hopefully engage people on other platforms and other subjects (our wines, our chocolates, our coffees, etc.).”

Grain de Sail’s on-board marketing activities this spring will commence following the boat’s initial unloading in Port Elisabeth, New Jersey, when it anchors alongside Brooklyn Bridge Park for 10 to 15 days.

Consumer-facing plans include visits, tastings and even brunch. “The idea is to open the boat as much as possible and turn it into an ‘attraction,’ because after all it is the world’s first modern cargo sailboat.”

Activities will include  a half-day ‘Private Outing in NY Bay” for six people, the prize from an earlier event for the Rocking the Bay charity; on-board Wine Nights for social media influencers; and “Wines That Sail” tastings at the nearby Estuary restaurant.

Other ongoing Grain de Sail marketing efforts include a YouTube series called “Winemaker’s Tour” and a “Promise” bottle label ensuring provenance and including a unique trip number (the current trip is “FR - NYC / 004”).

“We are trying to do 360° activation though we actually have quite limited means,” said Gallard. “We are a pretty small company, around 50 employees, and do most of our marketing and creative in-house.The one thing we barely do if any is media buying."