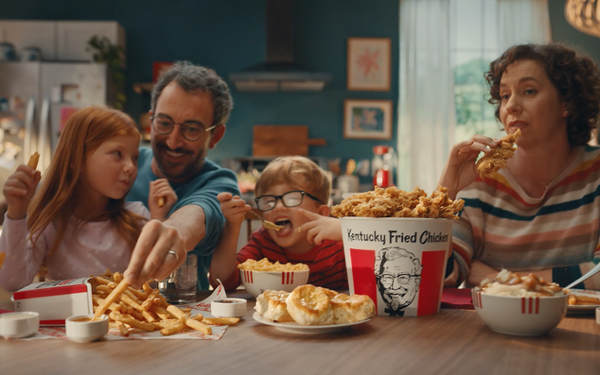 The “finger-lickin’ good” food is the centerpiece, not the famous fictional colonel, who plays a supportive brand role.

KFC is no longer an attribute; it’s an attitude. And it’s aimed at millennials who love chicken. The younger pitch is to align KFC as a product for them.

The new campaign, “Finger Lickin’ Good,” the first by MullenLowe Boston, has four TV spots, as well as a strong social component.

The four spots are “Anthem,” “Flirtation,” “Time Together” and “Razzmatazz.” The voice of Colonel Sanders then says after each one, “That’s finger lickin’ good!”

Whether enjoyed solo, with friends or family, the food — a traditional bucket meal or spicy chicken sandwich — is positioned as a satisfying part of life. The latter is described in “Flirtation” as a “saucy little minx,” an interesting departure from its more traditional pitch.

The IPG agency became KFC’s strategic and creative lead agency of record in February. The appointment came after a review that began last fall.

KFC also announced in February it partnered with TikTok creator and jewelry designer Isaiah Garza to develop a fund to donate $500,000 in cash grants to nonprofits fighting hunger across the United States. The effort ran through March 4. The #KentuckyFriedGivingChallenge is the first grant program on TikTok that benefits nonprofits.