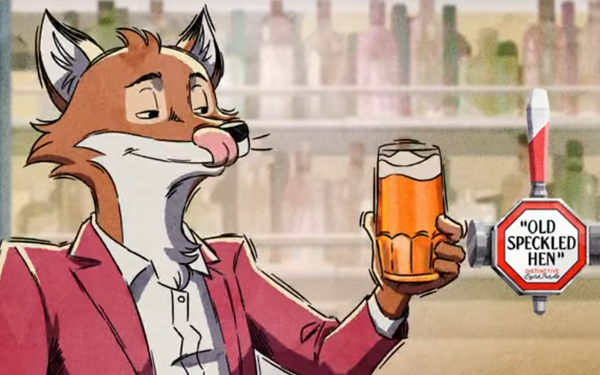 The work runs through May 18 on Sky, Channel 4, ITV and VOD in England.

Targeting 35-55 year-old drinkers, the campaign taps into an audience that sees curiosity as a virtue. Old Speckled Hen is positioned as an ale with a refreshing flavor for those interested in sampling new tastes.

In the new two 30-second animated ads — "Fox of the World" and "Try Everything Once" — Henry is in the pub reminiscing about things that resulted from curiosity, such as a Taiwanese meat cleaver massage from a monkey and eating Carolina Reaper chili.

Henry the Fox first appeared in Old Speckled Hen advertising in 1994 and was last featured in 2020.

The spots end with the tagline: "Old Speckled Hen – curiosity has its rewards."

In March, Next 15 acquired Engine Group UK for $97 million. As part of the acquisition, Engine Creative will merge with Next 15 agency Odd under the leadership of Odd group CEO Phil Fearnley. For the year ended December 31, 2021, Engine UK increased its net revenue by 18% to $110 million.