Some New TV Shows Are The Same, But 10% Different 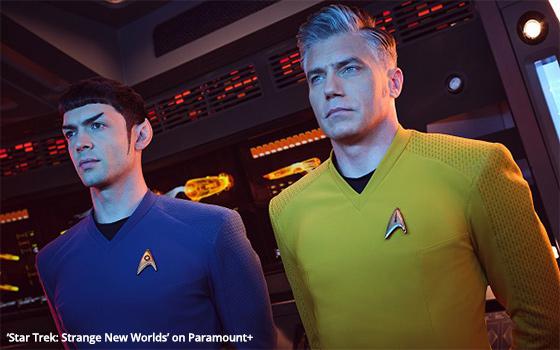 Someone once shared with me a strategy for creating something new that would not alienate those who were already well-satisfied with an existing product: Make the new one just 10% different.

This way of thinking came to mind this week when I scanned an online listing of new shows scheduled to launch in the next week or so on networks and streamers.

A number of the new shows coming soon seem to be guided by this "10% difference" philosophy.

For example, there is the new "Star Trek" show premiering Thursday (May 5) on Paramount+. This one, subtitled "Strange New Worlds" (a phrase taken from the famous opening title narration of the original series) is the sixth "Star Trek" title on the Paramount+ content list.

The other five subtitles are “Discovery,” “Lower Decks,” “Picard,” “Prodigy” and “Short Treks.”

There is nothing wrong with spinning off more “Star Treks” since the franchise's popularity is self-evident and by all appearances, these spinoffs form the bedrock of Paramount+'s subscriber base.

But their success may also be due in part to the 10% nature of each spinoff. They are each different shows, but they spring from familiar places where the show has gone before.

Still, the character is well-known enough in the “Star Trek” universe that a Pike-focused spinoff series makes as much sense as anything else. Look for this latest 10%-different “Star Trek” series to be as successful as all the rest.

Other examples of upcoming shows adhering to the 10% rule include “Love Match Atlanta” on Bravo (dating show meets “Real Housewives”) and “The Great Soul Food Cook-Off” on OWN.

It is like a slew of other food-competition shows, but with a 10% difference: soul food (which sounds delicious).

Elsewhere on the "upcoming" list: "Dating in the Jungle" on Discovery+, another dating show, but one that (possibly) takes place in a new locale -- a jungle (although information on new Discovery+ shows is so hard to come by that I didn't bother trying this time).

Another is "Commit Or Quit with Judge Lynn Toler" on WEtv, a judging show that bears similarities to other relationship court shows such as "Divorce Court," for example.

This new one seems to be about couples who are dating but not sure whether to take their relationships further. It sounds 10% different, but there have been so many relationship-reality shows that this new one might turn out to be 0% different.

There are other upcoming shows that also spring from the same 10% mold, but the point is made. In fact, one could make the argument that this very TV Blog is only 10% different from blogs that came before it.
discovery+, paramount+, streaming, television
Next story loading