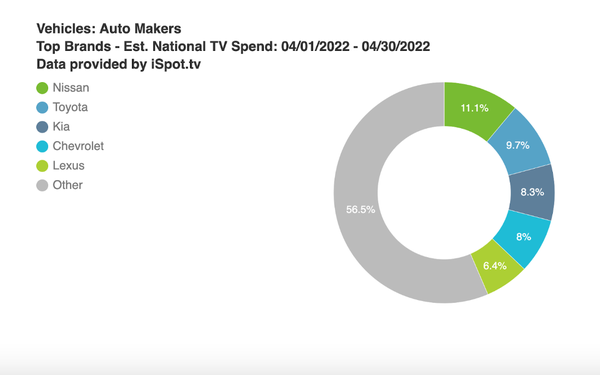 Automotive estimated national TV spending declined 14.4% in April, falling to $204.3 million compared to $238.7 million a year ago, per iSpot.tv.

Television ad impressions for the month were also down 5.7%, falling to 24.6 billion from 26.1 billion in a year ago.

Despite a limited number of men’s college basketball games in April, Nissan still made the most of them, with over 59% of the brand’s estimated national TV ad spend during the month allocated toward that programming, according to iSpot.

Toyota also focused on basketball, but to a lesser degree. For the month, NBA games had the largest share of spend for Toyota, at 11.8%.

In April, that shift was readily apparent again as these brands allocated 50% of TV ad budgets to major sports programming like the NBA and the Masters, he said.

In April 2022, Toyota put a larger emphasis on tentpole events compared to April 2021. On top of spending four times more during NBA games this April vs. last, the brand also advertised during the NFL Draft (eight times more) and Grammy Awards (which took place a month earlier last year), per iSpot.

Chevrolet, meanwhile, made similar moves toward sports as the brand advertised during both the NFL Draft and USFL games this April. But it also increased spend during both reality and drama and action shows.

Automakers flocked to the NBA as the regular season wound down and playoffs got started. TV ad impressions for auto brands during NBA games more than doubled from April 2021 to April 2022 (from 294 million to 820 million), per iSpot.

On CBS, golf (including the Masters) accounts for about 25% of automaker impressions delivered for the month, while "CBS Mornings" is over 13%, per iSpot.

Drama and  action shows led the way for automaker impressions on NBC (33.3% came during that show genre), but morning news also accounted for another 17.7%, with comedy and variety shows at 14.1%. On Fox News, over 34% of auto brand impressions came during early fringe (4-7 p.m.) programming.