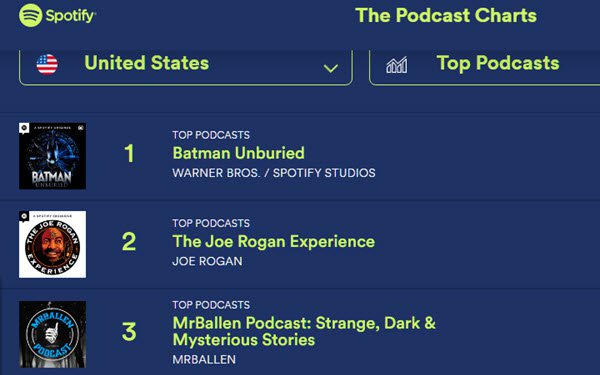 At least for the moment, The Caped Crusader has defeated Joe Rogan to become Spotify’s most popular U.S. podcast.

New podcast “Batman Unburied,” launched with two episodes on May 3, is #1 in the rankings, having bumped the controversial Rogan down a slot, according to Spotify's The Podcast Charts.

Spotify struck a $200-million exclusive deal with Rogan in 2020, and “The Joe Rogan Experience” was Spotify’s top podcast in 2021.

But it has also generated plenty of trouble for Spotify.

Several artists, including Neil Young and Joni Mitchell, pulled their music from the platform to protest Rogan’s dissemination of misinformation about COVID, India Arie did the same to protest offensive racial language on the show, and at least for a time, boycott calls on social media resulted in significant numbers of cancellations of Spotify subscriptions.

In addition, rival SiriusXM capitalized on the controversy by reviving its Neil Young radio channel.

Under a 2020 licensing agreement between Spotify and Warner Bros, “Batman Unburied" is the first podcast about DC Comics characters, with potentially other franchise characters to come.

Rogan could reclaim the top spot when Batman's novelty wears off, of course.