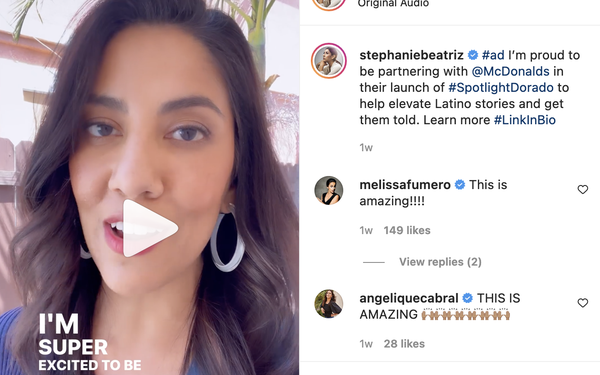 McDonald’s is attempting to spotlight unheard voices in the Hispanic community with its new campaign, “Spotlight Dorado.”

The TV spot announcing the initiative, via Alma, spotlights Hispanic artists who have stories to tell. The ad notes that less than 1% of stories Hollywood tells are about Hispanics, even though they comprise 18.7% of the U.S. population.

The ad features portraits of Hispanic artists, ending with one who goes from posing to tapping on her keyboard in what looks like a scene in a diner.

McDonald’s announced Spotlight Dorado, a multiyear platform for uplifting Hispanic talent and access to mentorship, last month. In an Instagram video, actress Stephanie Beatriz  (“Encanto,” “Brooklyn Nine-Nine”), talks about how she didn’t know how to get into the industry when she was younger and how Spotlight Dorado can help bridge that gap for others.