Lincoln Project Channels Apple's 'Crazy Ones,' But Not In The Good Way

The Lincoln Project's latest pro-democracy campaign borrows from a legendary Apple campaign targeting "The Crazy Ones," both literally and figuratively.

The spot, shot in the same grainy black-and-white style as the original Chiat/Day spot that launched Apple's "Think Different" branding, utilizes a similar narrative style, but instead of paying homage to "the rebels, the troublemakers, the ones who see things differently" (ie. Einstein, Gandhi, Dylan, Picasso, etc.), it slams the Republican party's nuttiest voices (Cruz, Palin, the January 6 insurrectionists, Marjorie Taylor Greene, Tucker Carlson, etc.) for being dangerous, if not explicitly crazy.

"You can't reason with them or disagree with them -- they glorify villains and vilify heroes," the spot's narrator intones. "About the only thing you shouldn't do is ignore them, because they have a plan to push America backwards. And while some may see them as crazy, we know they're dangerous. Because if we don't fight, the people who think they can stop progress will."

The commercial ends with a play on Apple's "Think Different" tagline: "Vote Different." 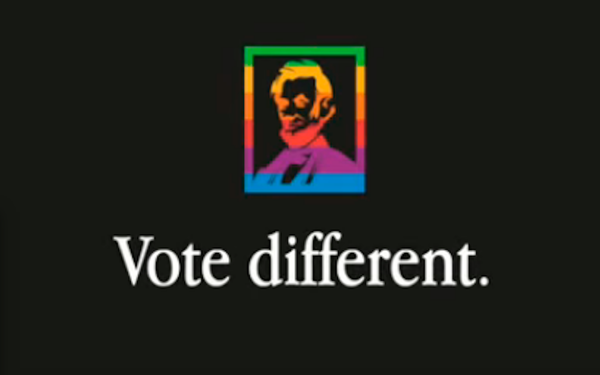 The Lincoln Project did not indicate whether Apple had approved or had anything to do with the spot, but it likely constitutes fair use.

“No one mistakes today’s Congressional Republicans for geniuses,” the project's Reed Galen said in a statement, adding: “But voters shouldn’t dismiss their plans to roll back individual rights as just crazy talk. It isn’t just outlier Republicans talking like this. The entire Republican Party is feverishly working every single day to take power and turn their warped fantasies into reality. Americans must stand up and fight for the future of the nation before it is too late.”