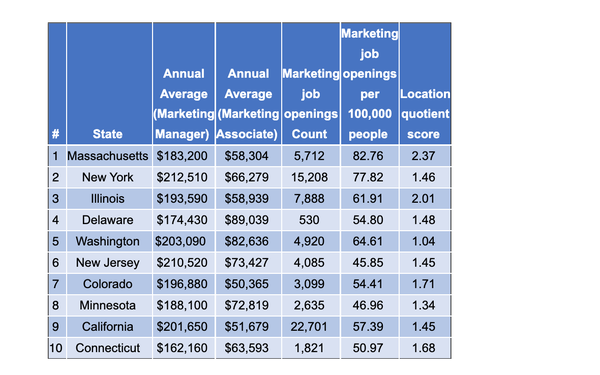 Massachusetts is the best state for a marketing career, according to data from the U.S. Bureau of Labor Statistics.

A study by digital marketing agency Hennessey Digital analyzed data to see which states offer the best opportunities in the field, as well as high wages.

New York and Illinois take second and third place when it comes to job openings.  Delaware, Colorado, and California also make the top 10.

Massachusetts provides the largest number of marketing job openings per 100,000 people when accounted for population, with 82.76.

The percentage of marketing jobs as a part of all employment in Massachusetts was more than double the national average, giving the state a location quotient score of 2.37 and ranking it top out of all 50 states.

However, Massachusetts' average annual salary for a marketing manager, $183,200, was outranked by most other states in the top 10, except for Connecticut and Delaware.

On the other end of the spectrum, the study found that the three worst states for marketing were Mississippi, West Virginia and Oklahoma.

Mississippi’s annual average salary for marketing managers of $75,890 was over $125,000 a year less than New York's. The bottom states ranked poorly on opportunities and wages, and generally lacked many jobs in the marketing field, with only 13 job openings per 100,000 people and a location quotient score of 0.29.

Going back to top-ranking states, New York came in second on the list, with annual average salaries for marketing managers and marketing associates sitting at $212,510 and $66,279 respectively. The state also had a large number of job openings for every 100,000 people with 77.82, showing that many marketing opportunities are available, like in Massachusetts.

In third place was Illinois, offering lots of opportunities in marketing and high wages and already a large variety of existing employment, with a location quotient score of 2.01. The state was found to have good wages for marketing managers, with a yearly average of $193,590, as well as an average of $58,939 for marketing associates.

Delaware came in fourth place on the list, with the state having the highest annual average salary for marketing associates with $89,039. It also scored well for marketing manager salaries, with $174,430.

The mountain west state of Colorado made its way into the top 10, coming in seventh place. Despite having the lowest average wages out of the top 10 for marketing associates with $50,365, the state performed well in its existing marketing industry, receiving a location quotient score of 1.71.

In ninth place was California, which boasted the largest number of job openings in marketing, with 22,701 at the time of the study. When accounted for population, it received a score of 57.39 job openings per 100,000 people. It also had the third-highest average salary for marketing managers in the top 10, and the seventh-highest out of all 50 states with $201,650.