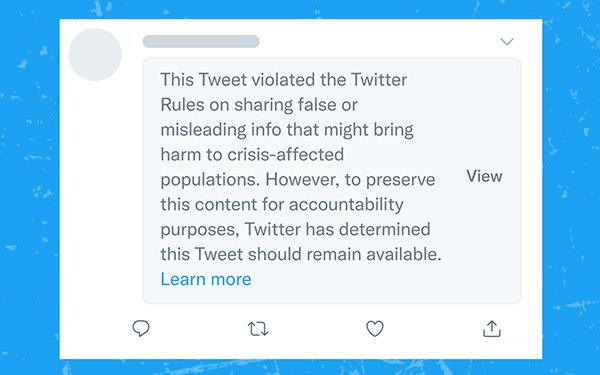 Twitter considers itself a place to find “reliable information in real time” -- a claim that can be easily marred by a tidal wave of misinformation, especially in times of crisis.

“We define crises as situations in which there is a widespread threat to life, physical safety, health, or basic subsistence,” the company said in a blog post.

In determining whether a tweet is misleading, Twitter says it will require verification from credible sources including conflict monitoring groups, humanitarian organizations, open-source investigators, journalists and more.

Once a tweet is deemed to be misleading, Twitter will ban it from the home page and search and explore, and label it with a warning notice, in addition to turning off likes, retweets and shares, and linking viewers to further details about its crisis policy.

But the misleading tweet will remain online -- allowing users to view it after clicking through the warning label. This, Twitter says, is for “accountability purposes.”

Tweets that go viral and/or are posted by high-profile accounts will be prioritized by the company, as they have a much higher possibility of gaining widespread visibility.

False coverage or event reporting, false allegations regarding use of force, false or misleading allegations of war crimes or mass atrocities, and false information regarding international community responses or humanitarian efforts are all examples of tweets that the crisis policy would label with a warning.

The policy will not interfere with tweets including strong commentary, efforts to debunk or fact-check, or first-person accounts.

Twitter says the first iteration of its crisis policy is purely focused on international armed conflict -- specifically the ongoing Russian attack on Ukraine.

“Content moderation is more than just leaving up or taking down content,” wrote Twitter’s head of safety and integrity Yoel Roth. “We’ve found that not amplifying or recommending certain content, adding context through labels, and in severe cases, disabling engagement with the Tweets are effective ways to mitigate harm, while still preserving speech and records of critical global events.”

However, with Elon Musk's bid to buy Twitter in a perpetual state of limbo, brands advertising on Twitter may have trouble settling into any understandable content- regulation policy, as Musk's views of free speech may vary from the policies the company is currently enacting.