Travelers To Iceland Invited To 'OutHorse' Their Email 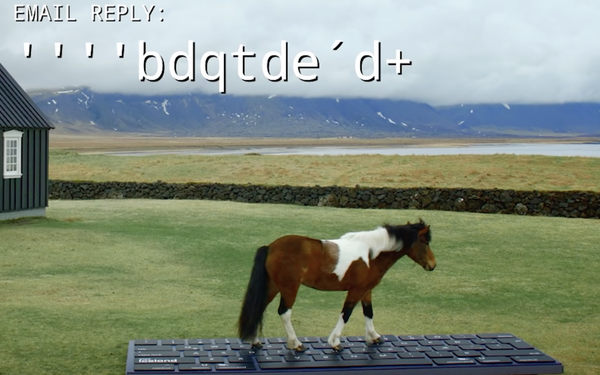 The nation of Iceland has taken it upon itself to give Americans a break from email when they’re on vacation.

The campaign, via SS+K, M&C Saatchi Talk and Peel, comes as a global study by Visit Iceland found that 41% of people check their emails up to four times a day when on vacation, while 14% check them between five and six times a day.

That’s the impetus for "OutHorse Your Email," a program that lets travelers select an Icelandic horse to walk on a giant keyboard that sends return messages like “þþnjifai=’.,,lmbmbnbbhgycdrgzw/’pfæ..” Travelers can request to get their return emails written by the horses while they vacation undisturbed.

In the video, people are shown vacationing in Iceland while checking their email, then an announcer explains the program. “They are trained in corporate buzzwords,” the narrator says. “Your boss will never know the difference.”

The campaign comes after Inspired by Iceland released a video last year, featuring “Zack Mossbergsson,” who bears more than a passing resemblance to Meta’s Mark Zuckerberg. In that video, Mossbergsson presents the Icelandverse, an analog to Meta’s metaverse