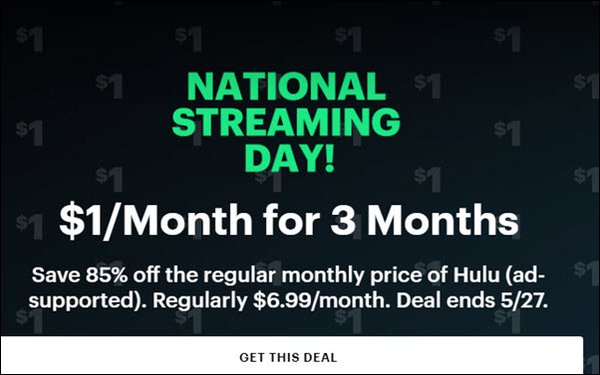 Disney-controlled Hulu has slashed the price of its ad-supported offering 85% for a promotion designed to pump up its significantly slowed subscription growth.

The deal offers the normally $6.99-per-month ad-supported video-on-demand (AVOD) service for just $1 per month for the first 90 days. (Similar to a deal offered on Black Friday 2021.)

Launched on “National Streaming Day,” May 20, it’s available to new and eligible returning subscribers for only a week, through May 27.

As far back as 2019, Disney reported that ad-supported video-on-demand accounted for 60% to 70% of total Hulu subscriptions, and AVOD continues to dominate, Disney CFO Christine McCarthy confirmed last week (although not providing a current share breakout).

Hulu is also running a promo offering three free months of Xbox’s PC Game Pass for U.S. subscribers who are new Game Pass members, as part of its “Friends with Benefits” rewards program.

The slowdown in part reflected an actual loss of 200,000 subscribers for Hulu + Live TV in Q1, which ended the quarter at 4.1 million total.

Disney raised prices for the virtual multiplatform video programming distributor (vMVPD) at the end of last year by $5, to $69.99 with ads and $75.99 without ads. But it sought to soften the hike’s impact (and up its overall D2C numbers growth) by adding access to Disney+ and ESPN+ as part of the deal.

But neither Hulu as a whole or Hulu Live + TV are alone in seeing reduced momentum. SVODs have slowed as a whole and rival vMVPDs Sling TV and fuboTV lost 234,000 and 73,500 subs, respectively in Q1 2022, according to Lichtman Research Group.

That reality is one key driver for the company’s decision to boost Disney+’s sub growth by launching an AVOD version later this year.