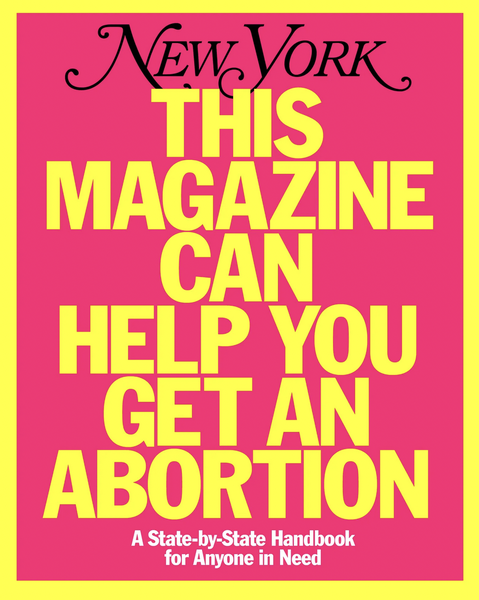 The cover lines for New York magazine’s latest issue say it all: “THIS MAGAZINE CAN HELP YOU GET AN ABORTION,” written in giant, bright yellow letters.

Known for service journalism, though usually of a more-superficial sort (like “How to Choose a Great Olive Oil,” featured in the same issue), New York this time aims to help women facing “the consequences of Roe v. Wade’s likely demise.”

The heart of the handbook is a state-by-state listing of abortion clinics, with red-lettered entries for states at greatest risk of losing abortion rights. Those typically have a very short entry. South Dakota, for example, has only one clinic, a sign of how access to abortion has already become very limited.

Women living in those states can consult the handbook’s in-depth sidebars on medication abortions, which “already account for over half of all legal abortions in the U.S.” A list of organizations that will send pills by mail includes the suggestion to “use a secondary, out of state mailing address,” which “may allow the providers to send you pills legally” for those in states that ban telemedicine for abortion.

A first-person account of one woman’s medication abortion provides helpful tips for making the procedure “less terrible,” including products to stock up on (like “saltines and Gatorade for nausea.”)

Another sidebar explains how to avoid crisis pregnancy centers, anti-choice “clinics” that masquerade as abortion providers.

The guide and adjoining articles will live online as a free searchable database allowing users to search by Zip Code for professional providers.

Not everybody reads New York magazine, of course. To get the message out, the publication is “leveraging paid digital ads across social media platforms to amplify the package and tool to people across the country, including those who may not regularly engage with our content,” Priyanka Mantha, a spokesperson for New York magazine, told Publishers Daily. The pub is also “exploring working with content creators to help amplify the tool on their social platforms."

This is not the first time New York has provided help for pregnant women. Abortion became legal in 1970 in New York, which was also the first state to allow nonresidents access to the procedure, according to Christopher Bonanos in a post on New York’s online vertical The Cut. The magazine published “a guide to the state of medical affairs” then, and in 1972, after the state had become “an abortion destination,” ran its first handbook, with “evaluations of clinics and hospitals.”