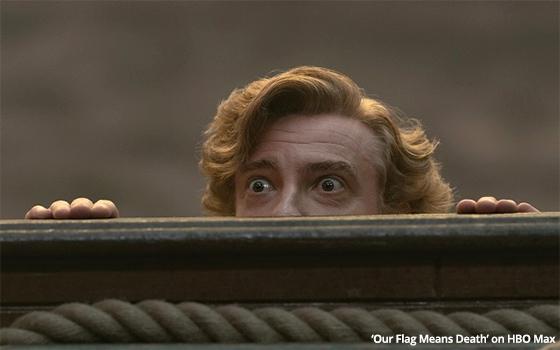 Who could have predicted that a comedy series about a cowardly pirate and another one about a house of funny ghosts would both do well enough to get renewed for second seasons?

The TV Blog did not predict it nor expect it. Both shows, which premiered this season, seemed to belong to a bygone era -- the 1960s -- when far-out concepts dominated prime time: twin cousins, a talking horse, a flying nun, “The Munsters,” “The Addams Family,” and the list goes on.

The TV Blog’s review last February of the pirate comedy -- “Our Flag Means Death” on HBO Max -- was not so much negative as it was skeptical.

The review poked fun at the very concept of a pirate comedy and cast doubt on its prospects. And yet, the show just received a second-season renewal, according to a news release from HBO Max on Wednesday.

Taking place in 1717 and starring Rhys Darby (pictured above), the show is about an English aristocrat who decides to liven up his dull, aimless life by taking to sea as the captain of a pirate ship.

The problem is, he knows nothing about the realities of pirate life and soon learns in mid-voyage that pirates steal things and murder people -- criminal activities that this clueless blueblood never imagined would be expected of him.

“Finally, someone has produced the TV comedy we have all been waiting for -- a pirate parody! The aforementioned sentence was meant to be sarcastic,” read the TV Blog’s review.

Who knows? Maybe people were waiting for a pirate comedy. A cursory investigation reveals that “Our Flag Means Death” is indeed the first pirate comedy series in the history of television.

Meanwhile, the haunted-house sitcom “Ghosts,” which premiered last fall on CBS, may remind some old-timers of the 1960s sitcom “The Ghost & Mrs. Muir,” adapted from a 1947 movie of the same name.

In that show, a woman rented an old seaside house only to find out it is haunted by a 19th-century sea captain (but not a pirate as far as I can tell). The show was short-lived.

In “Ghosts,” a young couple in New York moves upstate to take up residence in a mansion they inherited in the hopes of converting it into a bed-and-breakfast.

But unbeknownst to them, they are sharing this spacious, old home with eight ghosts who resent their arrival. The comedy stems, at least in part, from the diversity of the silly ghost characters and their bumbling, fruitless efforts to frighten the couple into leaving.

The TV Blog locked on to the show’s anachronistic qualities from the get-go. “A new fall sitcom on CBS feels like a throwback to the wacky world of 1960s television. This is not intended as a compliment,” read the first two sentences of the TV Blog’s review last September.

However, viewers embraced “Ghosts” and so did CBS’s parent ViacomCBS (now Paramount Global). Not only will “Ghosts” be back on CBS for a second season this fall, but it will also have a conspicuous presence on the company’s streaming service, Paramount+.

A press release on May 10 ballyhooed the show as “one of the biggest comedy hits in years and one of the most talked about shows.” The TV Blog had no inkling of the “talk” surrounding this feel-good ghost sitcom, but if they say so …

A pirate comedy and a ghost sitcom might be seen as the beginning of a new trend toward silly, escapist TV comedy as a refuge from a tumultuous, dangerous world.

As a matter of fact, another comedy in the same vein predates them -- “What We Do In The Shadows,” about a family of vampires trying to live normal lives in a Staten Island neighborhood.

In 2019, the TV Blog came out negatively about this one too. As usual, it didn’t matter. “What We Do In The Shadows” is scheduled to begin its fourth season on FX next month.