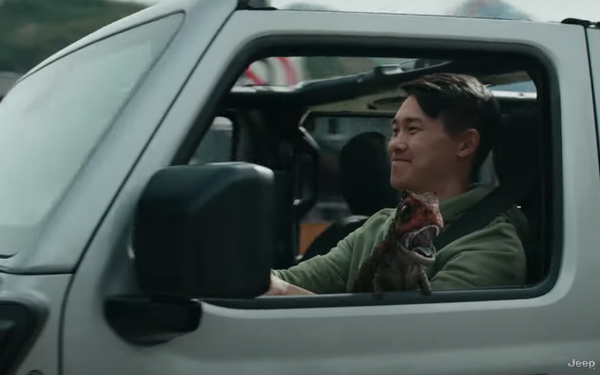 Stellantis' Jeep brand is once again joining with Universal Pictures and the “Jurassic Park” franchise.

The 60-second Jeep brand spot launches across Jeep brand social media channels, including Instagram, Facebook and TikTok while the 30-second cutdown will run on TV. A behind-the-scenes footage showing the making of the commercial is also available for viewing.

The video features Jeep Wrangler 4xe, with a baby “Carnotaurus” along for the ride, in addition to the all-new Jeep Grand Cherokee 4xe. The baby dinosaur was created specifically for the Jeep brand spot.

The global campaign will run in markets around the world, including Europe, Middle East and Asia Pacific.

Members of Jeep’s owner loyalty program, Jeep Wave, can see the film early at drive-in events in cities around the U.S. on June 8, including Detroit, Chicago, New York, Miami, Los Angeles, and on June 9 in Warwick, New Jersey.

Almost 30 years ago, moviegoers saw Dr. Ian Malcom escape danger from dinosaurs in the original “Jurassic Park” while riding in the back seat of a 1992 Jeep Wrangler.

In 2018, prior to the release of “Jurassic World: Fallen Kingdom,” the Jeep brand launched a 60-second spot that paid homage to the iconic scene in "Jurassic Park" featuring the Jeep Wrangler.

“Here we are now in 2022, and we continue to see the evolution of the Jeep brand around the world with electric plug-ins, including the Jeep Wrangler 4xe and Grand Cherokee 4xe, which are quite literally charged for any adventure, this time with a four-legged passenger of a different kind riding along in the front seat,” Francois told media members gathered online at a briefing today.

The tie-in between Jeep and the movie satisfies what Francois says are the three essential elements of effective marketing: relevance, authenticity and meaning.

The effort doesn’t "'smell’ like marketing,” he says. “A million viewers will see the new Wrangler in the movie, so this is obviously fantastic visibility. It’s nice to have, but visibility is not the name of the game. The name of the game is relevance. What I love about this partnership is the cultural relevance. It helps keep the brand on the global cultural map.”

The effort continues a connection with a movie franchise that puts the Jeep vehicles in their element, says Stephanie Brinley, principal automotive analyst, S&P Global Mobility.

"It’s more impactful for lasting through the movie franchise history, it reads like an enduring relationship rather than a marketing play," Brinley tells Marketing Daily. "This about brand reinforcement more than reinvention or revival, and as Jeep pointed out, an opportunity to show its evolution in context of Jeep, particularly Wrangler, capabilities and purpose."