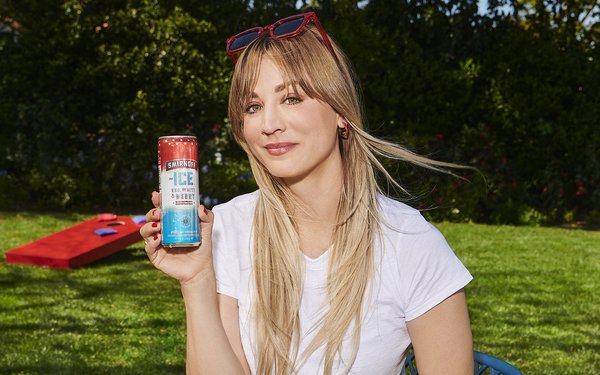 Tuesday was quite the day for actress Kaley Cuoco.

At noon ET, People broke the news that Cuoco probably won’t return for a third season of her HBO Max series, “The Flight Attendant.”

She already had another gig, though.

Two hours later, Diageo’s Smirnoff Red, White & Berry vodka announced that Cuoco had joined the brand as chief summer officer (or CSO). “Cuoco will report to no one, she's her own boss,” according to the official press release.

Cuoco’s duties in her new position include starring in a marketing campaign targeted largely at 21- to 34-year-olds titled “How to Summer: Grown-Up Edition.” Some of her tips include: “Did you know Summer Fridays are the best time to turn your computer screen off and happy hour on? You do now”; “The best reports to read this summer? They're called weather reports”; and “Packing for the beach? Leave room for Ice. Smirnoff Ice Red, White & Berry that is.”

Smirnoff broke the campaign last Friday with a front-page newspaper ad in USA Today and local ads in the Detroit Free Press, Cincinnati Enquirer, Columbus Dispatch, Indianapolis Star, Milwaukee Journal Sentinel and Lafayette (IN) Journal and Courier, mostly on the back pages of sports sections.

Cuoco also stars in 11 video ads -- two :15s and nine “06s -- airing nationwide via the USA Today network and locally on the web sites of the six newspapers above.

In one of the longer spots, Cuoco closes her laptop, says “Repeat after me. Computer screen off. Happy Hour on” and then parties it up with friends and Smirnoff, saying “One of the best parts about being an adult is, we get to call this networking.”

In the other, she says, “Hey. Do you want a summer babysitting gig for someone who won’t listen, cries all the time and refuses to go to bed? Well, guess what? Neither do your friends. So please, drink responsibly.”

The press release did include fine print stating that Cuoco is “not an actual employee of Diageo. This role was created for entertainment purposes only.”

Indeed, last fall, as reported in Marketing Daily, Cuoco starred in a spot for Smirnoff’s “Vodka for the People” campaign that promised to “Give the People What They Want!”