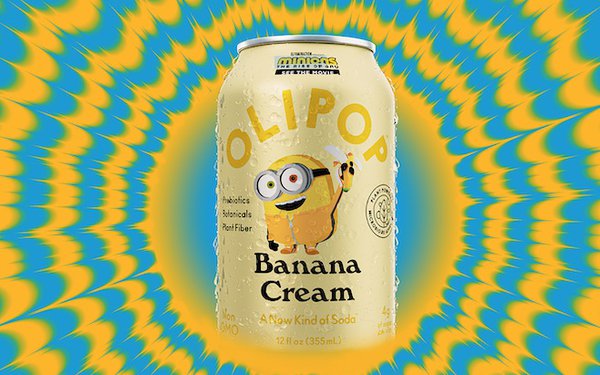 When it comes to the blockbuster movie franchise “Minions,” a cheesy campaign is quite appropriate.

Meal-kit provider HelloFresh is delivering on this concept by giving people the chance to win one of three “cheese blasters” fashioned after the device used by “Minions” supervillain Gru.

Meanwhile, Olipop has a partnership with “Minions” in which the functional-soda brand is launching a limited-edition banana cream flavor in the walkup to the July 1 release of “Minions: The Rise Of Gru.”

For those who haven’t experienced the world of "Minions," protagonist Gru uses his six-canister cheese blaster as a weapon to soak people and objects with liquid cheese.

HelloFresh wants people to create Minion-shaped pizzas and upload the images to social media platforms or a dedicated website to be eligible to win movie tickets, kitchen swag, a year’s worth of HelloFresh meals and one of only three real cheese blasters available.

In this spot, a family preparing pizza hears strange noises before discovering the meal has taken on a smiley face.

When two Minions appear, the mother asks “Did you do this?” The critters alternate between confirming and denying their role.

“Just as the Minions franchise brings joy to the screen, HelloFresh brings that same excitement to kitchens and families across the globe,” Reich tells Marketing Daily.

The three cheese blasters for the HelloFresh promotion were created in a partnership with Texas-based Department of Wonder—a venue that offers an immersive mix of physical and digital entertainment.

Olipop’s special-edition flavor is “made for the world’s most lovable evil henchmen”—yes, “Minions,” as seen in this commercial.

Available through July 15, it can be purchased on Olipop’s website and, starting June 16, via delivery platform Gopuff in select markets.

Launched in 2018, Olipop sodas contain prebiotic plant fiber and are advertised as “gut-friendly.”

The company has attracted such celebrity investors as Mindy Kaling and Gwyneth Paltrow.