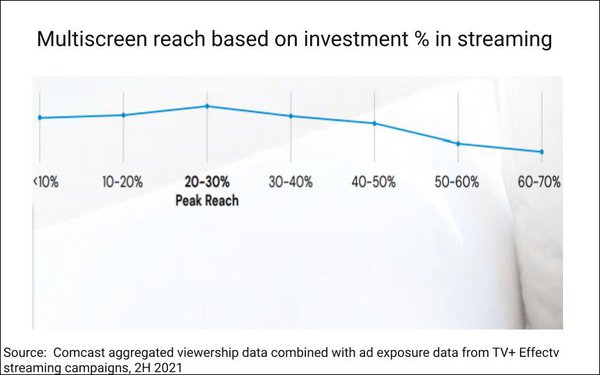 Comcast Advertising has released a report that recommends that 20% to 30% of premium video ad budgets be allocated to streaming and the rest to traditional television.

Comcast, of course, has a firm foot in both camps. But it says its recommendation is based on an analysis of more than 20,000 campaigns using Comcast aggregated viewership data and ad exposure data from TV+ streaming campaigns conducted through its Effectv ad-sales division in second-half 2021.

“Advertisers shouldn’t be making a guess or ‘going with their gut’” about how to best balance investment across TV and streaming to optimize campaign performance, said James Rooke, general manager of Effectv. “Rather, they should focus on the data. Looking at tens of thousands of campaigns across verticals and across budget amounts, the data is quite clear: TV should still act as the foundation for most advertisers, but reach is highest when 20-30% of the budget is allocated to streaming.”

While advertisers should consider adjusting within 10% and 40% for streaming depending on the audience, the analysis found that beyond 40%, streaming benefits are outweighed by the minimization of traditional TV.

The study — one element within what Comcast is describing as its first annual advertising report — found that 82% of multiscreen campaign reach is unique to traditional TV.

It also found that 51% of the 18% of households reached only through streaming or a combination of streaming and traditional TV are incremental to TV campaigns.

This jibes with viewer behavior insights gleaned through Comcast aggregated viewership data and a 2H video marketplace report from Freewheel, its ad-tech arm.

Specifically, that viewers are still spending six hours and six minutes per day watching traditional TV, but on their own schedules (71% of it outside of primetime, for example).

The analysis further found that 89% of traditional household TV viewing is devoted to live TV watching, and 54% of digital video content viewing is live versus 34% spent watching longform. (And that 8% of total campaign reach was unique to sports, and 42% of all households reached by sports programming were incremental to the campaign.)

Especially with the rapid growth of free, ad-supported streaming service (FAST) viewing, “Advertisers who rely only on traditional ‘standbys’ like primetime and top networks will see their campaign reach decline as consumers spread out their consumption,” argues the report. “By using ever-increasing data on viewing across all endpoints, marketers will help foster an ecosystem driven by audiences and outcomes, rather than content.”

Insights regarding ad-buyer behaviors included in the report:

*Last year, nearly 60% of advertisers included a digital screen in addition to their TV campaign to maximize reach.

*Advertisers’ use of first-party data is indeed increasing as the phase-out of cookies looms—particularly for political and automotive campaigns.

The report also summarizes the broad trends expected to continue going forward: Investment of growing portions of video ad budgets in streaming as streaming viewership growth continues; a shift to new measurement currencies driven by audience-based buying; growing use of first-party data; and the scaling of addressable advertising due to better technology and increased inventory availability.

On the last front, Comcast Advertising reports seeing 20% month-over-month growth in addressable advertising since the start of 2021.