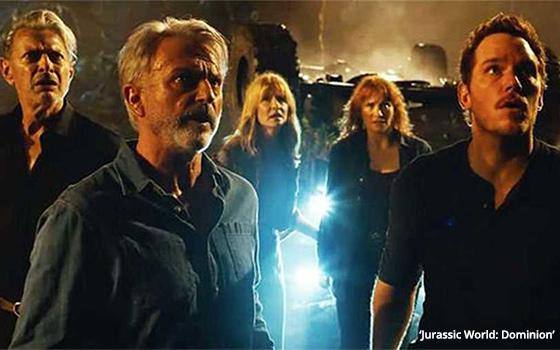 Comscore says the two movies comprised the bulk of the total of more than $210 million for the weekend -- only the third time the North America box-office total has topped $200 million since the pandemic era began in March 2020.

This "Jurassic” edition came in under previous openings of the franchise -- now six films to date -- and may have been impacted by some negative reviews. Rotten Tomatoes gave it a 30% positive number, coming from 289 reviews.

Still, “Jurassic World: Dominion”  is the third-biggest domestic opening of the pandemic era.

“Top Gun” now has amassed $393 million in North American box-office business. The film opened on Memorial Day weekend with $156 million, which was followed a week ago with $86 million.

The huge “Jurassic” franchise tops all theatrical movies in national TV advertising for the last two weeks -- earning 843.6 million impressions from 2,726 commercial airings, with an $6.5 million in estimated national TV spend, according to iSpot.tv

Disney Pixar’s upcoming animated “Lightyear” comes in next with 653.7 million impressions and 2,252 airings, and $7.2 million in estimated national TV advertising.

Universal Pictures continues to be busy in the next coming weeks, with two more summer releases “Minions: The Rise of Gru” (650 airings) and “The Black Phone” (577 airings).

Those TV commercials have resulted in 226.7 million and 168.4 million impressions, respectively. For “Minions,” estimated spend was at $3.9 million; “Black Phone” at $2.0 million.