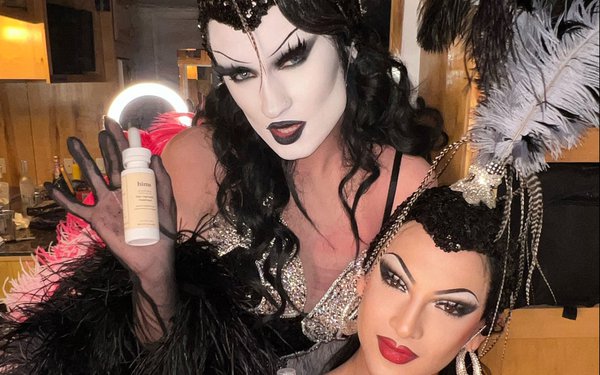 Hims & Hers, the D2C health site that dispenses everything from hair-loss medication to birth control to antidepressants, has found a campier way to talk about serious problems.

The company is sponsoring a Pride Tour with drag superstars Violet Chachki and Gottmik, who both have plenty to say about the telehealth company's core product offerings.

Hims & Hers is the official telehealth sponsor of the "No Gorge" Tour, named for the duo's podcast. The deal also calls for partnering with the Trevor Project to spread the word about mental-health resources for young members of the LGBTQ community.

The tour runs through mid-July.

"We're incredibly proud this Pride month to be joining forces with the Queens and The Trevor Project," said Bette Ann Fialkov, the company's senior director of entertainment and culture, in its announcement. "It's beyond exciting to be working with the 'No Gorge' Pride Tour superstars on destigmatizing conversations and treatment surrounding conditions that many feel are shameful or embarrassing to have."

Plans call for both Queens to engage their extensive social-media fanbase. "We are particularly looking forward to a unique and fun social campaign with Violet and Gottmik to help people embrace themselves for who they are and take action to take care of their body and mind," she says.

The San Francisco company is riding high on the telehealth boom. Last month, it reported a 94% jump in revenues, at $101.3 million. And its subscriptions grew 82% year over year, reaching 710,000 subscriptions.

The Trevor Project is the world's largest suicide prevention and crisis intervention organization for LGBTQ young people. Its mission is center stage this year, with more than 200 anti-trans bills pending in various states -- many explicitly targeting young people. Homicide and hate crimes against the trans community hit record highs last year, and the organization's research shows an increase in suicidal thoughts in the LGBTQ community.

"We are selective with the companies we engage with," says Shira Kogan, its director of corporate partnerships, in an email. "In addition to accepting monetary support to operate and scale our lifesaving crisis services, we play an active advisory role to help companies firmly plant their commitments in the ethos of their company."

Kogan says brands are uniquely positioned to make meaningful connections with LGBTQ young people all year. In its research with more than 40,000 LGBTQ youth, "more than half said brands that support the LGBTQ community positively impact how they feel about being LGBTQ."

Earlier this year, Taco Bell introduced the Taco Bell Drag Brunch in cities across the U.S., hosted by Kay Sedia and starring local performers. And each event introduced attendees to the work of the It Gets Better Project, encouraging volunteer opportunities and donations.