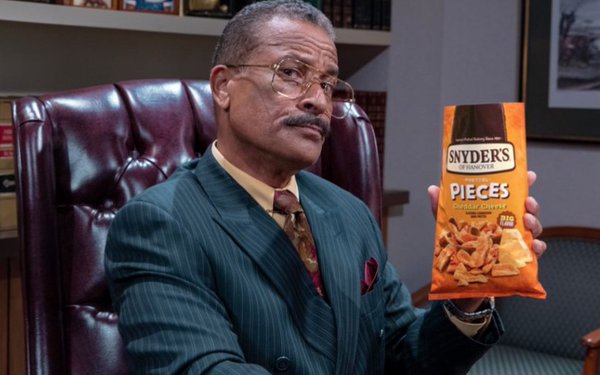 Cosmo Kramer must be proud.

Jackie Chiles, Kramer’s lawyer in the sitcom “Seinfeld,” is taking to the screen to challenge the legitimacy of Snyder’s of Hanover’s Pretzel Pieces being called pretzels.

Actually, it’s actor Phil Morris reprising his role as Chiles—who reaches a “deal” with Snyder’s after expressing outrage over the concept that pretzels broken into pieces and doused with bold flavors can actually be called pretzels.

As this spot from Saatchi & Saatchi opens, Chiles is in full-throated, aggressive attorney mode as he asks whether viewers who purchased Pretzel Pieces expected to get normal, pretzel-flavored pretzels.

“Were you shocked by the outrageous, audacious, egregious flavor of a spicy, hot buffalo-wing wing? Then you may be entitled to compensation.”

But Chiles becomes upset when his script takes an unexpected turn and he reveals the surprising terms of the deal: free Pretzel Pieces for life.

Looking sideways, he asks, “What do you mean we’re settling on free Pretzel Pieces for life?”

In traditional legal advertising fashion, the phone number 1-844-JCHILES is displayed at the bottom of the screen.

Callers to the number can enter a contest to win a lifelong supply of free Pretzel Pieces.

The brand chose to resurrect Chiles’ character because it resonates across demographics, according to Nick Hammitt, vice president of marketing, salty snacks, at Snyder’s parent Campbell Soup Co.

“The brand looked to build off the cultural phenomenon and resurging popularity surrounding the ‘Seinfeld’ show among younger millennial and Gen Z consumers as well as original fans,” Hammitt tells Marketing Daily.

The production went to great lengths to replicate the look and feel of the “Seinfeld” set.

“The original ‘Seinfeld ‘was captured in 4:3 aspect ratio—to fit the predominantly square 90’s tube TVs—and we felt it was important to shoot this campaign in the exact same way in order to stay true to the original,” says Hammitt.

“Additionally, to bring the famed Jackie Chiles back to life, the brand recreated the iconic look of the original series by emulating the set and wardrobe—even including the exact artwork from the original office set.”