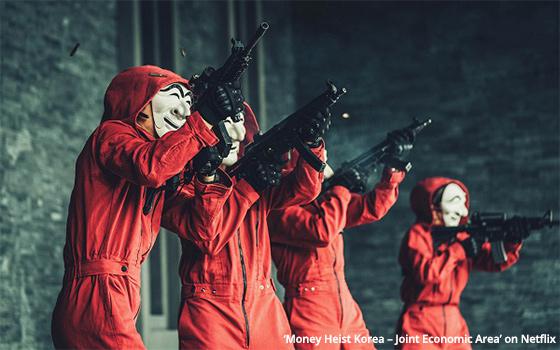 In a new drama series coming to Netflix on Friday, South and North Korea are moving gradually and cautiously toward unification.

In the show -- titled “Money Heist Korea - Joint Economic Area” -- the big first step in the unification process is a dramatic transformation of the famed Demilitarized Zone that has long divided the Korean peninsula into a zone where economic cooperation has replaced hostility.

This is the Joint Economic Area (JEA) in the show’s title -- a new zone where business is allowed to thrive for the benefit of both countries.

In addition, Koreans from both North and South are now permitted to travel freely between the two countries.

The creation of this new zone and the peaceful coexistence it represents is the result of trilateral negotiations between North Korea, South Korea and the United States.

In the show, this thaw, and the economic empowerment zone resulting from it, are both happening in 2025.

That’s not very far away from 2022, but it is doubtful such a thing will come to pass in three years here in the real world.

The JEA is described in the show as just a first step toward eventual, full unity between the two Koreas -- that is, unless some big event intervenes to disturb this delicate balance.

As is fairly obvious from the show’s title, that event is an elaborate robbery of one of the central symbols of the JEA -- a vast facility where a new currency meant to unify the North and South economies is printed.

The perpetrators of this high-stakes “money heist” aim to get away with more than a trillion of this currency (it is not dollars, but a currency that is not familiar to me). Understandably, such a score has the potential to wreak havoc on the entire peninsula.

Fans of elaborate heist movies will certainly be captivated by the plot hatched by an enigmatic figure called The Professor and his band of societal misfits who each possess a skill in a specialized area such as computer hacking, marksmanship, explosives and the like.

If that setup sounds familiar, then that is because it is familiar. Every heist story of this type comes together in much the same way.

The excitement is in the way the plot is carried out -- what goes right and what goes wrong.

“Money Heist Korea” does not lack for excitement. And the robbery plan is among the most complicated ever to be choreographed for a TV show or movie, although it is not too difficult to nitpick and point out various flaws.

Most mesmerizing of all about this show is the quality of the filmmaking. As pointed out in previous TV Blogs about TV series imported from South Korea, the skill with which this show is put together is a pleasure to watch and, in its own way, just as exciting as the story it portrays.