Hulu Hit 'Only Murders In The Building' Back For More 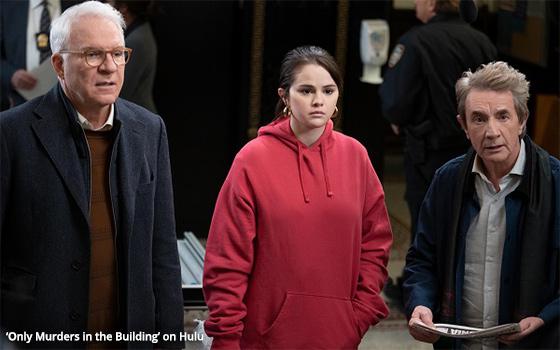 Judging by the way Disney promoted Hulu’s “Only Murders In The Building” at the Upfront in New York last month, the company evidently thinks very highly of this show.

And why shouldn’t it? The show has emerged as one of the most-watched series on Hulu, a Disney property.

This explains why the three stars of the show -- Steve Martin, Selena Gomez and Martin Short (pictured in the show above) -- were featured so prominently at last month’s Disney event.

They came on stage together early in the two-hour event, and even if their banter came across as forced, the point was made: This is one made-for-streaming series with star power.

That is no less true as the new season begins this week on Tuesday. In addition to the three A-list stars, new cast members for Season 2 are Amy Schumer and Shirley Maclaine (she’s 88 in case you’re wondering).

Nathan Lane was on the show last season but he was not in the premiere episode of Season 2 that the TV Blog watched last week.

However, where this show is concerned, watching just one episode was enough to reinforce the impression formed from Season 1 that this show represents a bright spot in the TV universe.

For those not yet initiated, the show concerns a trio of Upper West Siders (that’s in New York City) who took it upon themselves to investigate a murder in their apartment house.

Steve Martin plays an aging TV actor who gained fame decades ago when he starred in an old network cop show.

Martin Short plays a Broadway producer/director who has been out of work so long that he might lose his apartment. Selena Gomez plays a wannabe artist.

Not surprisingly, when it comes to sleuthing, the three neighbors are strictly amateurs. Despite this, they solve mysteries that confound the professionals in the NYPD.

But this is no “Murder, She Wrote” (no offense to Angela Lansbury). It is stylish, smart and contemporary. It is also keenly funny for the obvious reason that Steve Martin and Martin Short are in it.

For the TV Blog and anyone else who loves a TV show in which TV and show business play a part, this show is a gem.

These subjects are much on the minds of the Steve Martin character, Charles-Haden Savage (the television part), and Oliver Putnam, the Martin Short character (the Broadway part).

The two characters are out of touch with current trends in TV, entertainment and media in general so when they bemoan the fact that they no longer have seats at any of those tables, viewers of a certain age (Martin is 76 and Short is 72) can relate to both of them.

The second season of “Only Murders in the Building” starts streaming on Tuesday (June 28) on Hulu.