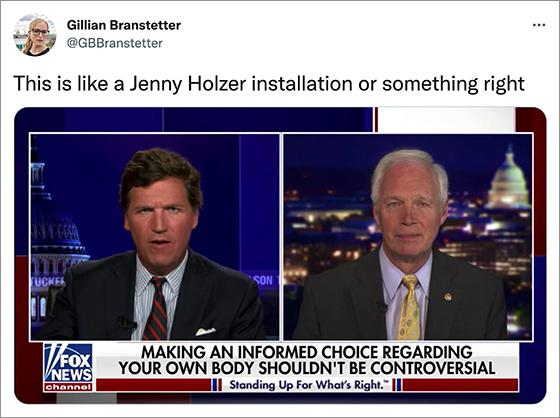 Last week, Fox News host Tucker Carlson referred to Roe v. Wade as “the most embarrassing court decision handed down in the last century,” and a “widely acknowledged joke.”

This past Saturday, just one day after the Supreme Court overturned Roe, a non-fungible token (NFT) of Carlson sold for 12 eth –– or about $14,500 –– after a heated online auction. Jenny Holzer, who created the NFT, said she will donate the money to several abortion rights groups, according to The Washington Post.

The NFT is made up of a tweet of a screenshot from Carlson’s May 11, 2021 show, in which he is speaking with Sen. Ron Johnson (R-Wis.) about declining to receive a coronavirus vaccine. “It’s your body, your choice, as we’ve heard for almost 50 years,” said Carlson.

At the bottom of the screen (and NFT) the text reads “Making an informed choice regarding your own body shouldn’t be controversial.”

Holzer –– an artist famous for her massive installations in Times Square –– first became aware of the screenshot when it was tweeted by a D.C.-based communications strategist named Gillian Branstetter, who tweeted: “This is like a Jenny Holzer installation or something right?”

Holzer decided to create an NFT out of the tweet and sell it just after the decision in Dobbs v. Jackson Women’s Health Organization came down this past Friday.

“I will confess a lot of ignorance about NFTs generally, but was happy to give permission for this work to help raise some much-needed funds for abortion access,” Branstetter told the The Post.

Branstetter received 15% of sales from Holzer’s NFT and says she will donate all of it to the DC Abortion Fund.

“Bodily autonomy and self-determination can be fraught, but privacy and health are pillars of the women’s reproductive rights movement,” wrote Holzer on Instagram. “Social health is the goal. We must protect the rights of the individual that protect the health of society.”

Holzer is donating the money raised to Planned Parenthood, the Center for Reproductive Rights, and PAI, a D.C.-based advocacy group.