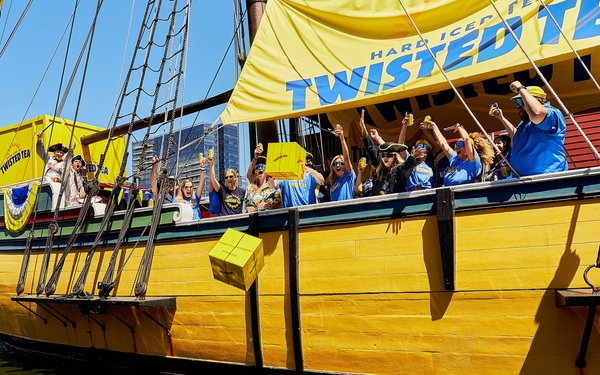 It’s a year too early for the 250th anniversary of the Boston Tea Party, and the protest itself occurred in December of 1773 -- but, hey, Twisted Tea Hard Iced Tea (aka Twea) is owned by Boston Beer, and there is that touristy Boston Tea Party ship right there on the harbor…

So the brand decided to throw its own Boston Twea Party on board the ship a couple of weeks ago, and then celebrate this year’s Fourth of July weekend by giving away 1,773 (get it?) e-gift cards valued at $18 to web visitors on a first-come, first-served basis starting June 30. The brand says that amount will cover the cost of a 12-pack.

In a separate social media sweepstakes, a big yellow Twisted Tea crate that’s been featured in Twisted Tea’s year-old “Tea Drop” ad campaign will be awarded to a single winner.

What’s in the crate? It’s “filled with summer essentials, from branded merch to money for Twisted Tea and everything in between,” according to Erica Taylor, the brand’s director of marketing.

The Tea Drop campaign, which has included "Tailgate," "Winter," the current "Beach" and an upcoming college football version starting in August, “features real Twisted Tea superfans from across the country sourced directly from our social channels,” Taylor told Marketing Daily.  She noted that the fan-first approach,ievident “across fan photos on every Twisted Tea bottle and can," has been the brand’s most successful campaign in its history.”

Taylor emphasized that the upcoming Fourth of July weekend activities are part of a strategy to “extend our Tea Drops beyond ads” by “celebrating  our fans in new ways…from larger-than-life branded elements to giveaways and beyond.”

Twisted Tea, which became one of the first beer-alternative beverages upon its launch in 2001, has shown double-digit growth for more than a decade, noted Taylor, and is currently the top fermented malt beverage (FMB), “nearing the top 10 brands in all of beer” and “the fastest growing brand in top 25 of beer brands.”

While it holds 93% of the hard iced tea category, the brand sees its competition as all FMBs as well as light beer, according to Taylor.

Age-wise, the brand has seen growth in all age groups, Taylor said, but with millennials and Gen X outpacing the others.