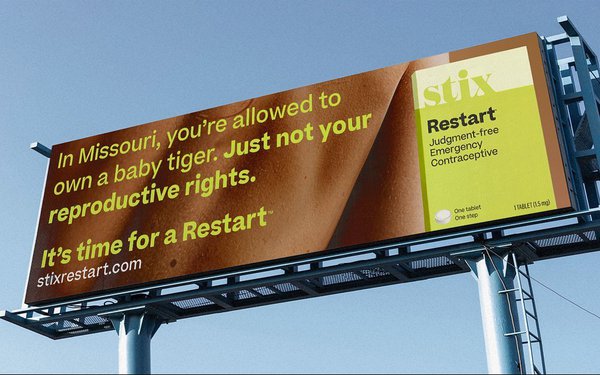 D2C-meets-prescription-birth-control has been a match made in heaven, even before the pandemic. Dozens of companies have sprung up to help digital natives navigate the aggravating maze of doctor’s appointments, trips to the pharmacy, insurance limitations and state restrictions, saving time and money as they do so.

But the U.S. Supreme Court decision to overturn Roe v. Wade last month is rattling the D2C business model relationship. And companies like Stix, Prjkt Ruby and Favor, formerly known as the Pill Club, are going on offense.

Most of these efforts are aimed at boosting the sale of emergency contraception. Marketed under brand names like Plan B and Stix’s Restart, these medications prevent ovulation when taken between three to five days after unprotected sex. And the CDC estimates that they’ve been used by 25% of women ages 22 to 49.

The medication is still legal in all 50 states, but the ruling set off a stampede of demand, with many fearing individual states may seek to ban the sale of the drug. Companies like Amazon and CVS had to limit the number of purchases available, due to demand.

Stix is running billboards, each reportedly within six miles of “Crisis Pregnancy Centers,” false clinics set up by pro-life activists to dissuade women from seeking an abortion.

Favor is also using out-of-home ads, tagged "They're coming for your abortion. Your birth control is next."

That’s not paranoia. In Missouri, Idaho and Louisiana, GOP lawmakers have already said they intend to block any method of birth control they deem “abortifacient,” or preventing pregnancy after conception.

And in the decision overturning Roe v. Wade, Justice Clarence Thomas specifically mentions targeting Griswold v. Connecticut, the 1965 case that made it legal for married couples to use birth control, as “demonstrably erroneous.”

A spokesperson for Favor says that in addition to an out-of-home ad campaign, it’s started an activation aimed at confronting U.S. policymakers who oppose abortion, demonstrating “the absurdity of a complete stranger dictating what a person can and can’t do with their reproductive system.”

Those include teaming up with TikTok creators The Luncheon Lawyer and Sewpheeyuh, who hand-delivered letters to anti-abortion activists, signing them up for vasectomies. The effort also includes a digital letter viewers can send to their representatives.

Donations are an important feature of these efforts. Prjkt Ruby has built in donations to birth control in the U.S. and abroad part of every purchase.

Favor knocked the price of emergency contraception down to $19 in early June, shortly after the leaked SCOTUS decision.

“We believe we can best serve our patients and anyone seeking an abortion by continuing to focus on birth control and emergency contraception,” says Chelsea Kohler, Favor’s chief marketing officer, in an email. “That’s why we're working with Abortion Finder, Hey Jane and I Need an A to ensure everyone is equipped with information on the closest clinics and laws in their states.”

It’s hard to overestimate the demand for all forms of birth control. Of the 72.7 million women of reproductive age in the U.S., generally measured as between the ages of 15 and 49, the Guttmacher Institute says 46 million are sexually active and don’t want to become pregnant.

Of those, 99% have used at least one contraceptive method.

While female permanent contraception is by far the favorite method, at 28%, birth control pills are a strong second, at 21%. Long-acting reversible contraceptives, including IUDs and implants, have been gaining in popularity since 2002, and now comprise 16% of birth control use.

About 3% use natural family planning methods -- a mixture of abstinence and rhythm method.

Still, experts expect most brands to stay publicly quiet about abortions, even as they amend their human resource policies.

Divisive issues are problematic for businesses, says Kimberly A. Whitler, a professor at the University of Virginia’s Darden School of Business.

Taking a stand can work well if customers are basically monolithic. If a company serving “primarily 18-34 year old female liberals most likely to be pro-choice, then the number of people who will anger is small,” she says. Engagement still needs to be “consistent with the company purpose, values and brand strategy.”

But she points out many polls show a considerable percentage of Americans who are pro-life. She points to Gallup’s recent survey, which reports that 39% of U.S. adults consider themselves pro-life, and 47% of men.

For most businesses, taking a stand is unwise. “Whichever side they pick, they immediately anger the other side,” Whitler tells D2C FYI in an email. “Recent research indicates that there is an asymmetric effect among shareholders, consumers, and employees. Those who agree with the decision are slightly more favorable, but those who disagree are significantly less favorable,” she says. “The downside cost is greater than the upside benefit.”