The Second Coming Of Joe Jaffe 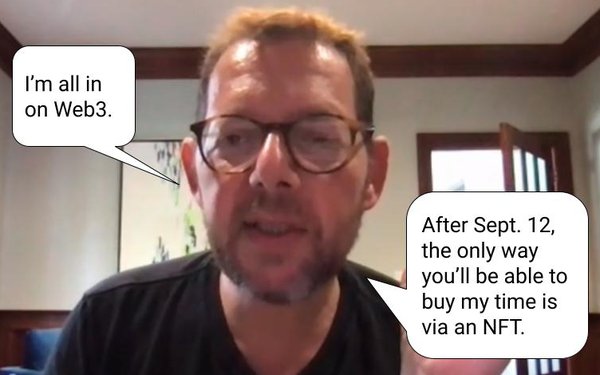 “You know what would be a better title,” Joe Jaffe says to me after I tell him I might use that headline for an article about him, “The Second Life Of Joe Jaffe.”

Jaffe was right. For two reasons.

The first is because it’s about Jaffe getting a second chance at life after undergoing a series of life-threatening events (open-heart surgery that led to multiple infections and hospitalizations, and then a serious case of COVID-19) that led to a business-ending one causing him to fold brand consultancy “HMS Beagle,” which ironically was supposed to help brands learn how to survive.

The other reason it’s a better headline for this story, is because “Second Life” works as a double entendre, because Jaffe’s next new thing is a lot like an old new thing – the Second Life virtual reality platform that was supposed to help launch brands into the metaverse.

Jaffe, if you don’t recall, was a consultant 15 years ago that helped develop a “Virtual Thirst” presence for Coca-Cola on Second Life that led to an article in Wired magazine criticizing big brands for pouring money into a virtual reality platform that had virtually no people on it.

But this time around, the main brand Jaffe is promoting in the metaverse – and vis a vis other Web3 incarnations – is his own.

Jaffe, who has been minting himself via a Rally.io creator coin aptly named “Jaffe Coin,” is in the process of creating what he says is his “biggest idea ever,” beyond all his past incarnations -- his books about multiple next new things, his public speaking, his pioneering agency (Crayon), and serial big idea consulting projects.

Jaffe is in the process of minting 1,000 NFTs that will be the only way anyone can access a new premium subscription service dubbed “Alpha Collective,” launching Sept. 12, which will include a weekly series of “mastermind” talks connecting big brands with big Web3 ideas, and the people developing them, as well as a a variety of premium events -- virtually and in real life -- and as-still-undisclosed premium swag for participating as founding members.

True to his promise of being all in on Web3, Jaffe says the NFTs can be redeemed as long as owners want to access Alpha Collective, but can also be resold in secondary markets based on what those markets can yield.

“I’m basically using the NFTs as a digital membership pass to an exclusive premium community,” he explains.

Jaffe is offering 1,000 NFTs for $2,500, “which if you do the math is $2.5 million,” he says, adding that it isn’t all going to his personal bottom line, but will be reinvested in various parts of the Alpha Collective community, including producing the in-real-life events, other premium swag and experiences, as well as 100 ETH (Ethereum coins, which currently fetch more than $1,000 on crypto exchanges) that he will use to pay back the community and fund various projects developed through it.

Jaffe is so in, that owners of those NFTs can sell them to others, giving them access to Jaffe for other projects they want to work on.

There are more moving pieces to the Web3 versioning of Jaffe, who says that except for some college classes he teaches, he has gone almost two-and-a-half years without sustainable revenue and is in search of new income.

The truth is he has other projects in the works, including his weekly podcast “Joseph Jaffe Is Not Famous,” which he calls “The Daily Show for Business,” and has high hopes of licensing to a big video platforms such as “Hulu, HBO Max, CNBC or Cheddar.”

But other than that, his teaching gigs, and whatever else might come along IRL, Jaffe says the only way to access his “mastermind” is by owning and NFT giving people access to the Alpha Collective.

Jaffe acknowledges that the timing of his launch -- coming amid a cryptocurrency crash, and a mounting backlash to some forms of initial Web3 marketing, including branded NFTs -- isn’t necessarily the best, but he says the ideas underlying it are sustainable, and only a matter of time before they manifest and begin to scale for marketers.

“Web3 has turned over more in a year than social has done in 10 and digital has done in 25,” he asserts, noting that he began predicting the emergence of “universal brand currency” more than a decade ago, and envisioned a time when Nike would have a “swoosh” coin and Coca-Cola would have a ribbon token, which is the way many marketers are experimenting with NFTs now in order to give consumers access to exclusive, premium brand experiences.

“The new permission marketing is an NFT, because once you buy into that, you are all in,” Jaffe says about the value those smart contracts can create for the marketer, not just the consumer. “ And the minute you sell that NFT, you are opting out.”

During a series of Zoom-based interviews with Jaffe, he repeated how everything he has done has “led up to” Alpha Collective, and how it is his “biggest idea." I remind him that he has said the same thing about most of the previous projects I’ve interviewed him on in his past.

“And I was right almost every time,” he says, then corrects himself: “Maybe every time.”