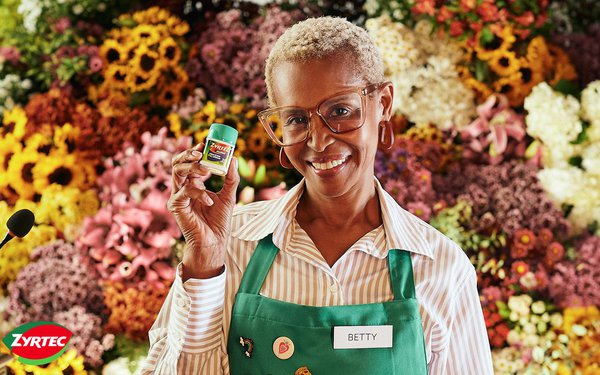 After a decade of ads that showed people visibly suffering from allergies and then getting relief from Zyrtec, the Johnson & Johnson brand -- like Zyrtec itself -- now eliminates the sneezes.

In a new campaign from Doner, Zyrtec’s AOR for the past three years, “Zeize the Day” replaces “Muddle No More” as the brand’s tagline. But the product benefit message remains: “Works hard at hour one, and twice as hard when you take it again the next day.”

As the campaign launched this week, Zyrtec said it is increasing marketing spend by more than 15% across key channels as compared with 2021.

That growth may be partly attributed to allergies growing from a seasonal problem into a year-round one. Jayne Lewis, Johnson & Johnson’s commercial director – allergy, cited research showing that 51% of allergy sufferers now experience symptoms year-round.

“Additionally, we recognized that COVID has changed the conversation around how we depict allergy symptoms,” Lewis told Marketing Daily. “Sneezing as a way to convey allergy symptoms is much more complex than it was when ‘Muddle’ launched.”

By leaving sneezing out of its ads, Zyrtec “can focus on connecting with allergy sufferers on an emotional level,” Lewis explained. “Consumers are savvy about their allergies; they don’t need to see allergy cues to understand what is happening.”

Instead, the campaign’s first two video spots, one in English and one in Spanish, “feature characters who are fun and vibrant and can be their most wonderful, amazing selves because they are not weighed down by allergies,” she said.

The spots, aimed specifically at medium and heavy allergy sufferers, are running on direct response TV, OTT, and CTV channels, with media buying handled by J3.

The English-language commercial features a cashier who has no problem at all handling a customer’s flower purchase thanks to taking Zyrtec.

In the Spanish-language spot, a woman almost sneezes when handed a flower at an outdoor gathering, but has no trouble at all after being given Zyrtec.

Coming up in the campaign will be additional spots, including two launching this fall.

All the ads will similarly “feature characters not held back by their sniffles and sneezes,” said Lewis. “Their energy is contagious. Others around them can’t help but want to join in.”

Also upcoming are digital and social creative launching in early August, and Zyrtec’s first sonic logo, being developed with Antfood.