Peacock 'Resort' Mystery Series Is Worth An Extended Stay 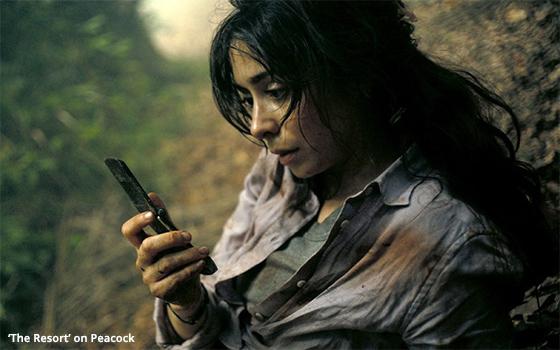 In the course of just one 35-minute episode, “The Resort” goes from apathy-inducing to one of the brightest spots on the TV landscape this year.

This is due mainly to the way the plot thickened about halfway through the first episode of this new, multi-episode, limited series coming to Peacock on Thursday.

Over years of watching TV for a living, the TV Blog has learned that much of TV is nothing if not predictable.

So, when a show suddenly veers suddenly in an unexpected direction, it is worth making an extending stay.

Such was the case with “The Resort,” a title that is so general that it refers only to the setting for the show, but gives no hint of what the show is about.

The resort in the title is a fictional, all-inclusive destination in Cancun. As the show opens, a 30-something couple is seen arriving at the place to mark their 10th anniversary.

The problem is, their marriage is in a rut, and the most bored and listless of the two is the wife, Emma (played by Cristin Milioti, pictured above).

From the get-go, the show presents as a depressing, mopey drama about a marriage on the rocks.

But it morphs into something else entirely when Emma literally stumbles on an old flip phone buried in the wet leaves of the jungle floor.

And suddenly, the show’s marital ennui storyline takes a backseat to a mystery story centered on the phone and the digital information it contains.

It should go without saying, but a mystery story is better than a woeful marital story any day.

It is especially true where “The Resort” is concerned. It is the first TV mystery the TV Blog has yet encountered that is based on a buried flip phone, the generation of cell phones that preceded smartphones.

It is the second such show to come along in 2022 whose centerpiece is a piece of technology that went out of circulation years ago.

The other show, “Archive 81,” premiered on Netflix last January. That show’s mystery story was based on a trove of old, decaying VHS tapes that would reveal how a young woman went missing in 1994.

Like that show, “The Resort” uses flashbacks to tell its stories. In “The Resort,” the stories are about two couples -- one in the present day and the other in the era of flip phones.

In one scene, a young woman in the earlier era asks her boyfriend to stop for a second to take a photo she calls a “selfie.” To which he asks, “What’s a selfie?” Those were the days, right?

“The Resort” starts streaming on Thursday (July 28) on Peacock.