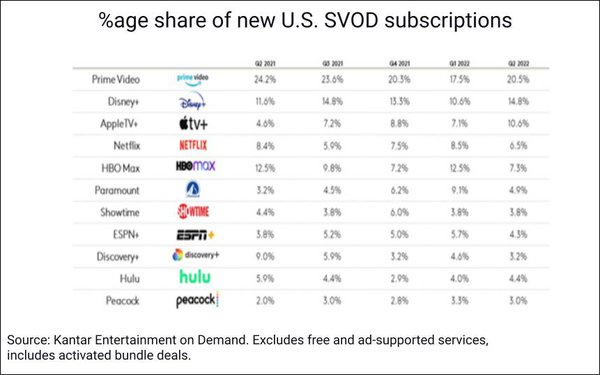 After stalling for the first time in this year’s first quarter, the number of U.S. households with subscription video-on-demand (SVOD) subscriptions rose by two percentage points quarter-over-quarter in Q2, according to Kantar’s Entertainment on Demand Service.

As of June, 113 million U.S. households were accessing at least one streaming service.

The growth “underscores the resiliency of streaming and consumer demand despite challenging economic conditions for US households,” notes Kantar.

However, churn remains high, with 8% of subscriptions cancelled during Q2, and consumer perceptions of “value” are increasingly important to retention as service competition intensifies.

Netflix’s share of households continued to decline in Q2 — down six percentage points year-over-year, to 61%.

Part of that is due to Amazon Prime Video, which grabbed the largest share of new U.S. SVOD subscribers (20.5%) for a fifth consecutive quarter (see table above), to Netflix’s 6.5%.

Disney+, Apple TV+ and HBO Max also gained larger shares of new subs than Netflix, although another new entry, Paramount+, did not.

Of course, as by far the most mature streamer, Netflix’s growth would be expected to slow because of its high penetration rate.