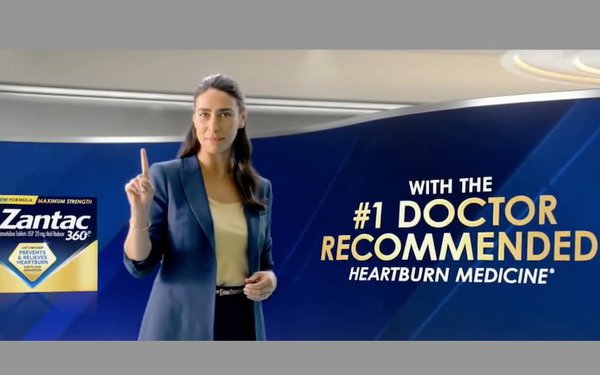 Sanofi Consumer Healthcare is pushing back on a recommendation that it discontinue the “#1 doctor-recommended” claim for its Zantac 360° heartburn medicine in a case brought by competitor Johnson & Johnson Consumer Inc.

Johnson & Johnson, which markets Pepcid, had complained about advertising claims for Zantac 360° on Sanofi’s social media pages, the websites of third-party retailers and in a television commercial.

The NAD concluded that claims for Zantac 360° convey the “reasonable message” that it is the #1 doctor-recommended “product or brand” to prevent and relieve heartburn—contrary to Sanofi’s contention that the claims refer to the active ingredient in Zantac, famotidine.

Famotidine—also the active ingredient in Pepcid—isn’t mentioned in the TV commercial but it is seen in an image of the product’s packaging.

Until 2019, the active ingredient in Zantac was ranitidine. That fall, the U.S. Food and Drug Administration recommended people avoid medicines containing ranitidine because of concerns that they could contain a nitrosamine impurity.

Sanofi told the NAD that its educational marketing program was aimed at assuring consumers that Zantac 360° is a different product from Zantac containing ranitidine, because it has a new formula containing the well-established famotidine.

“Sanofi argued that both the express wording in the main claims and the surrounding context of the ads clearly indicate that the advertising is referring to Zantac’s active ingredient,” the NAD noted.

As of Monday, copy on the Zantac 360° website described the product thusly: “Zantac 360° OTC contains the FDA-approved active ingredient famotidine—the #1 doctor recommended medicine approved to both prevent and relieve heartburn—and is clinically proven to be safe and effective.”