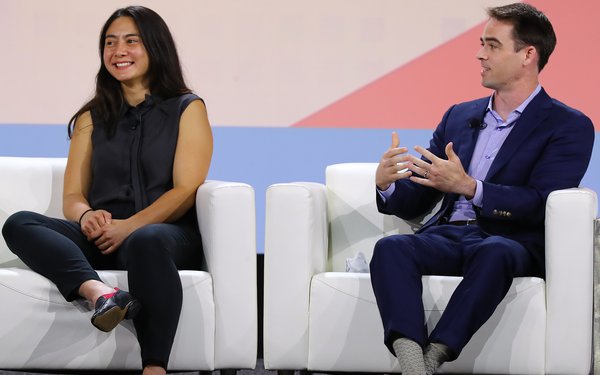 Image above, of Erica Cheung and Tyler Shultz, courtesy of AACC.
A key moment in the downfall of Elizabeth Holmes and her company Theranos took place at the American Association for Clinical Chemistry’s (AACC) Annual Scientific Meeting in August, 2016.

Already immersed in scandal, Holmes used a key speaking slot at the conference to unveil the Theranos blood-testing device -- or perhaps we should say, “alleged” device.

Even before her appearance -- largely greeted by a skeptical response from the scientific community -- some members of the AACC had been furious at her invite from the AACC’s then-president, according to a Financial Times report at the time. At least one member of the organizing committee effectively resigned in protest.

This was the last time Holmes would show the public any Theranos products. She was indicted on criminal fraud charges in June 2019, and Theranos was dissolved in September 2019.

Fast-forward six years to this Tuesday, and a conversation focused largely on corporate ethics by the two most famous people to resign from Theranos: whistleblowers Erica Cheung and Tyler Shultz.

Indeed, Shultz recalled how, when he made a final attempt to get his grandfather, Theranos board member and former U.S. Secretary of State George Schultz, “to do the right thing” by holding Holmes accountable, he was  told, “In two weeks, Elizabeth is unveiling the technology at the AAC conference and, when she does so, it is going to knock everybody’s socks off.”

Shultz and Cheung both spoke about the intimidation tactics by Theranos after they blew their whistles.  Schulz called it a “really scary time” when “they tried really hard to gaslight us,” and Cheung noted that the company did “a ton to retaliate against us. I was terrified.”

Even after successfully going out on her own and co-founding the nonprofit Ethics in Entrepreneurship, the Theranos effect lingers on Cheung.  “I haven’t signed a lease for the last eight years of my life, because I don’t want people to know where I live,” she told the AACC audience.

Both whistleblowers spoke of being followed throughout the day by private investigators, not to gather any info but as a “fear tactic to show that [Theranos] had power over us,” according to Tyler.

As for Holmes, “She preyed on people who would not hold her accountable. The board was full of these old men who’d just fawn over her, who treated her like the prettiest girl on the playground more than a CEO,” he said.  A similar situation occurred with investors, he continued. And so, the company raised “almost a billion dollars in capital without an investor ever seeing an audited financial statement.”

Shultz called for boards of directors to be more active in rooting out corporate malfeasance, but noted that, in Theranos’ case, the “sole source of information,” both for the board and investors, was Holmes, leading both Cheong and Shultz to take the “Break Glass in Case of Emergency option.” He called for businesses to develop ways for “boards and investors to be able to get information not just from the CEO. There should be channels for people like me and Erica to be able to talk with board members. You shouldn’t have to be related to one.”

By the way, if you know about Cheung and Shultz only from the “The Dropout,” Hulu’s recent limited series about Holmes and Theranos, be advised that neither of them were ever contacted by anyone involved with the show, that Cheung hasn’t watched it, and Shultz gave up after six of the eight episodes.

Specifically, he “had to stop watching” after a scene in which the character playing himself sent an email message written by Cheung from his own account instead, “because I’m a Shultz.”

It was “like they took my story and Erica’s story, and put all the pieces into a pot, and took all of the smart parts and gave them to Erica and gave all the privileged white parts to me.... I thought it was wildly inaccurate.”

For accurate accounts, both Shultz and Cheung praised Alex Gibney’s 2019 HBO documentary “The Inventor: Out for Blood in Silicon Valley” and John Carreyrou’s 2019 nonfiction book, “Bad Blood: Secrets and Lies in a Silicon Valley Startup.”

Carreyrou, who broke the Theranos story in The Wall Street Journal, spoke at the 2018 AACC confab.

This year’s session ended with a fitting line from the current AACC president and panel moderator, Dr. Stephen R. Master: “You are both heroes in my book.”