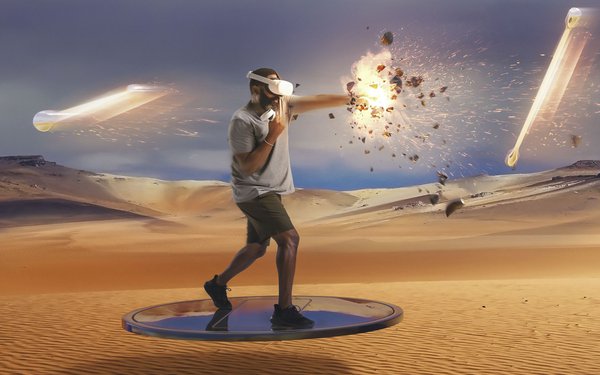 The Federal Trade Commission on Wednesday sued to prevent Meta from acquiring Within Unlimited, developer of the virtual reality fitness app Supernatural.

The deal would bring Meta “one step closer to its ultimate goal of owning the entire 'Metaverse,'” the FTC alleges in a 32-page complaint brought in federal district court in San Francisco.

The agency has asked a federal judge to issue an injunction preventing Meta from completing the purchase.

A Meta spokesperson says the FTC's case “is based on ideology and speculation, not evidence.”

“The idea that this acquisition would lead to anticompetitive outcomes in a dynamic space with as much entry and growth as online and connected fitness is simply not credible,” the spokesperson stated.

The FTC was divided over the potential acquisition, with commissioners voting 3-2 to sue Meta.

The agency alleges in its complaint that the estimated $400 million acquisition would lead to reduced competition in the market for virtual reality fitness apps.

“That lessening of competition may result in reduced innovation, quality, and choice, less pressure to compete for the most talented app developers, and potentially higher prices,” the FTC claims.

The complaint alleges that it is “reasonably probable” that Meta would have entered the virtual reality fitness app market through alternative means -- such as developing its own app, or adding features to its Beat Saber app (a virtual reality “rhythm game”) -- had it not agreed to purchase Supernatural.

“Meta has developed multiple [virtual reality] apps from scratch before,” the FTC alleges. “Absent this anticompetitive acquisition, there is a reasonable probability that Meta would have exercised one of its other available options to enter the dedicated fitness app market.”

Meta disputes that claim, stating Wednesday that it considered and rejected developing its own fitness service.

“The FTC asserts, seemingly based on little more than Meta’s size, that we would either build a fitness-specific service like Supernatural from scratch or somehow convert Beat Saber into such a service,” Nikhil Shanbhag, vice president and associate general counsel said Wednesday in a blog post. “But given the vastly different uses and audiences for these apps, and the fact that many other well-established brands like Apple and Peloton are far better positioned than Meta to bring their existing fitness products and content to VR, doing so wouldn’t make any sense.  Indeed, we looked into building a fitness-specific service and decided we simply weren’t in a position to do so.”

This new lawsuit is in addition to an existing FTC antitrust case against Meta over its prior acquisition of Instagram and WhatsApp. That lawsuit, first brought in December of 2020, is pending in Washington, D.C. federal court.