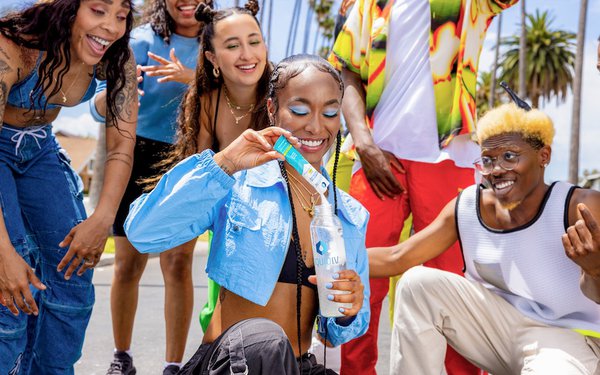 Powdered-drink brand Liquid I.V. wants to broaden awareness of the need to stay hydrated beyond traditional sports-based positioning to something more ubiquitous: play.

As in “Fuel Your Play,” the broadest campaign in the brand’s 10-year history.

It’s aimed mainly at Gen Z and millennial audiences, and focuses on Liquid I.V.’s rapid-absorption rate and the importance of hydration during typical summer activities.

The company is spending $20 million on the campaign based on consumer research into attitudes and usage occasions, according to Liquid I.V. vice president of marketing Stacey Andrade.

“What we found is that those usage occasions are actually pretty non-relevant. Consumers will tell you ‘that really doesn’t look like my daily life.’”

Within the past year, it wasn’t unusual for Liquid I.V. to post 20-minute videos depicting full-body workouts and routines known as “total resistance exercises.”

However, in new creative from SixTwentySix Productions, it’s all about gender- and racially diverse youths dancing in the street, playing in backyards, skateboarding (and falling down), with a couple diving off rocks into a water hole.

The spot ends with the voiceover “Because life’s better when you’re hydrated.”

A main differentiator for Liquid I.V. is cellular transport technology, which Andrade describes as a “nutrient blend that allows us to deliver rapid absorption of water directly into the bloodstream. So you can hydrate twice as fast as water by itself.”

The concept of play came about “as an open space that intuitively links to hydration,” Andrade adds.

“It’s not very top of mind for people on a daily basis that they need to be hydrating. It’s a matter of educating them on the prevalence of it and how it’s important for their foundational wellness.”

Liquid I.V. is using out-of-home placements near golf courses, local transit systems and screens at gymnasiums “to meet consumers where they are in different touchpoints on their journey” along with a sampling tour in certain markets.