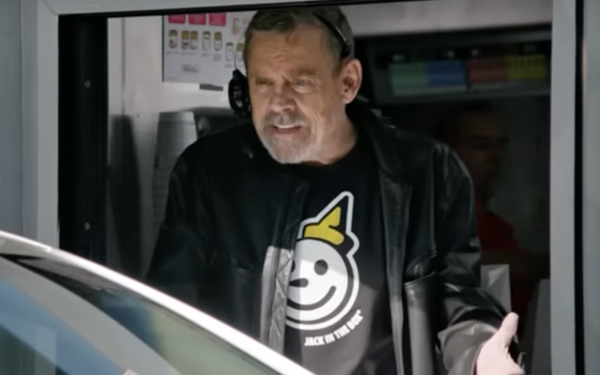 When Jack in the Box named its new agency roster in March, it stressed the need to reinvigorate the QSR brand in popular culture.

So, last month, its new public relations agency Small Girls PR took only a week to turn around an earned media campaign based on the news that J-Hope of the Korean boy band BTS had named his newest album, yes, “Jack in the Box.”

And, this week, three years after “Star Wars” icon Mark Hamill revealed on “The Late, Late Show with James Corden” that Jack in the Box had fired him a long, long time ago, the chain has hired him back -- as the face of a paid ad campaign from its new creative agency TBWA\Chiat\Day LA.

The campaign’s background goes back some 50 years. Here’s the story, as described by Hamill himself in a campaign spot where he surprises customers by taking orders at a Jack in the Box drive-through:

“I worked here as a teenager. I finally got to work the window and I thought, instead of just saying, ‘Can I get your order?’ in my regular voice, I’d do it in clown voice.... They didn’t like it at all. All these years later, they called me up and said, ‘Do you want to come back?”

So he does. His motivation, as expressed in another spot: “to not get fired again.”

Spoiler alert: Hamill doesn’t get fired this time, but quits instead! Returning to that first spot, he’s happy about his “twice in a lifetime” opportunity, but when his manager -- who has reprimanded him for talking to customers too much -- asks, “So you’re coming back tomorrow?” Hamill replies, “Nah, I’m good.”

For Jack in the Box, using Mark Hamill helps the brand reach across generations. As Sheena Dougher, the brand’s senior director, marketing communications, tells Marketing Daily: “Hamill is one of those rare actors who has such a natural connection with his fans of all ages, from his early days on screen to his more recent roles. His fandom is vast.”

The campaign, with media buying from Carat, will run through the end of fall on TV and connected TV, with “ample weighting in high-reach football properties,” plus YouTube, audio ads on Spotify and Pandora, and paid social on TikTok, Snapchat, Twitter and Meta properties.

There will also be a limited-edition print and digital publication, The Return of Mark Hamill - A Comic Book, that will be available online for free. The plotline: “It’s a story of fate, friendship and redemption, decades in the making.”

Finally, as an integral part of the campaign, Jack in the Box is bringing back a couple of limited-edition menu items that it says are some of Hamill’s favorites and that star in two of the three video spots: Spicy Chicken Strips & French Toast Sticks.