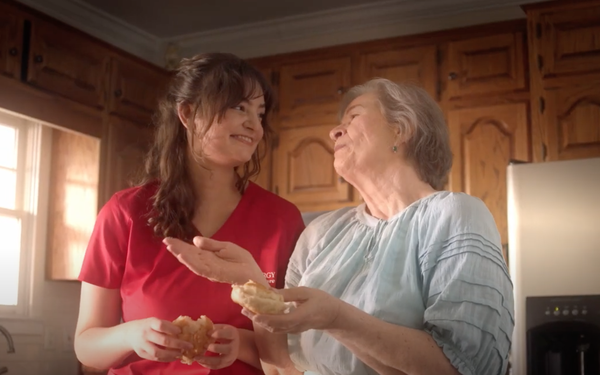 Synergy HomeCare, a fast-growing national home care franchisor, is launching its first-ever TV campaign and the first effort under its new CMO.

The national effort centers around the “Synergy Effect,” a new brand platform that demonstrates how Synergy HomeCare caregivers positively impact the lives of the people they care for and their families.

Synergy HomeCare has nearly 200 franchisees operating in more than 400 territories across the country.

The home care space is growing exponentially to meet the demand of the aging population, says Synergy HomeCare CMO Jennifer Chasteen, the former head of U.S. marketing at Church’s Chicken who landed at the company in December.

Elderly baby boomers and aging Gen Xers will prompt an increasing need for healthcare services. AARP reports that the 65-plus population will grow by 30.4% to 73 million by 2030, and that 90% of this group want to “age in place.”

Advertising agency of record Luckie & Company created the effort, which includes two 30-second spots, "In Sync” and “Sense of Style.”

“In Sync” shows caregivers assisting their clients on a walk, getting ready for the day, and playing the piano together. It closes with a voiceover:“We believe memories matter. But feelings matter more. The Synergy Effect. Brought to you by Synergy HomeCare.”

“Sense of Style” follows a similar theme, while showing caregivers using a well-worn, handwritten recipe to cook with their client, helping knot a tie, and playing chess on the patio.

“With Synergy in the brand name, it was refreshingly simple to point to the synergistic effect between those who need care and those who provide it to them,” said Maria Goodall, group creative director, Luckie & Company.

The Synergy Effect created an “ownable” way for the brand to illustrate this unique home care relationship, she adds.

“In each vignette, something very human and beautiful happens between two people that makes them feel more, see more and experience more in their day, and in their lives,” she says.

The spots are airing on Oxygen, OWN, Hallmark Channel and other networks that engage seniors and their adult children, as well as potential caregivers.

The fully integrated approach also features Pandora streaming audio, along with streaming video including YouTube, and connected TV. Targeted mobile, native and display digital ads, and paid social round out the campaign, which will run through the end of the year.

The company provides a broad range of non-medical in-home services including personal care, for individuals who are living with a physical or developmental disability, a chronic health condition, or who are recovering from illness or surgery.