Creator Of Hulu Show 'This Fool' Is No Fool 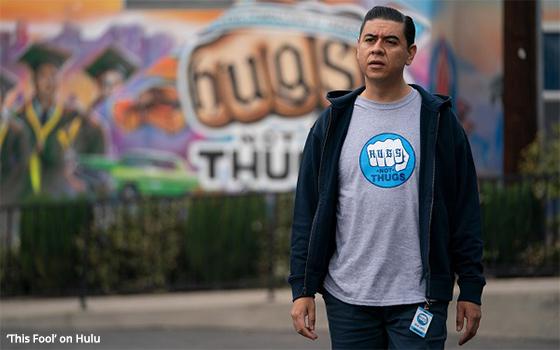 This “fool” is Chris Estrada, a personality who is still so unknown that even Wikipedia has never heard of him.

This is likely to change now that he has an outstanding comedy series set to begin this Friday on Hulu.

Titled “This Fool,” Estrada created the show and stars in it. He is also co-writer and one of the show’s executive producers.

He plays Julio Lopez, a 30-year-old still living at home in a middle-class, Latino neighborhood in L.A.

He works as a counselor at a non-profit that works with gang members recently released from prison who seek to leave the gang life and change their lives.

The show’s central conflict -- i.e., the situation in this situation comedy -- comes in the form of Julio’s cousin Luis (played by Frankie Quinones) who is released from prison after a multi-year term and comes to live with Julio, Julio’s mother (Luis’ aunt) and their grandmother.

When Luis’ tia y abuela tell him he must go straight if he wants to live in their house, he has to join the program at Julio’s rehab center called Hugs Not Thugs. There, he clashes with Julio.

Unlike so many other so-called comedies on TV and streaming these days, “This Fool” has not forgotten the comedy.

At the same time, it manages to be heartfelt, moving and even sweet -- despite the fact that much of the show deals with men who are more steeped in prison culture than life on the outside.

This is where much of the comedy comes from. For example, in the series premiere, the “thugs” in the program -- including Luis -- are tasked to bake cupcakes.

When they complain that baking cupcakes is unmanly, their baking supervisor emerges from the kitchen and delivers an intimidating speech that is like something they might have heard from the toughest convict in a prison yard. And just like that, they’re baking cupcakes.

Above it all, “This Fool” is about family. It is a Latino family, but relatable to all. So is Mr. Lopez’s neighborhood.

“This Fool” starts streaming on Friday, August 12, on Hulu.