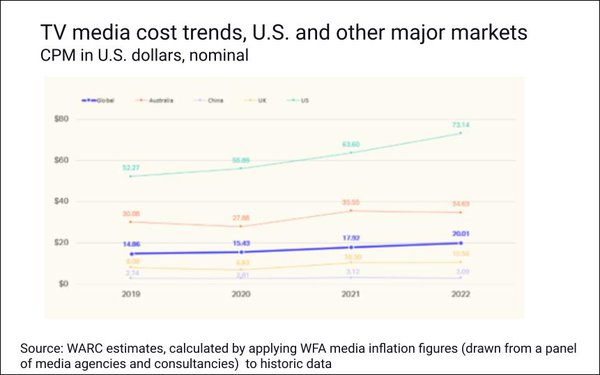 WARC points out that the impact is particularly strong in heavily TV-dependent categories like food and automotive. If those categories had maintained their 2019 levels of investment in TV (79.8% and 67.7%, respectively), by 2021, their volumes of impressions would have dipped by 18 percentage points, the analysts point out.

While some advertisers have reduced TV budgets in the face of declining linear viewership and rising costs and the growing reach and power of digital media, digital media have also been impacted by inflation.

Paid social media CPMs jumped 33% between 2019 and 2021, according to Skai, and the growing reach of and advertiser demand for retail media platforms have pushed up those prices, as well.

And while channels such as broadcaster video on-demand (BVOD) provide an alternative source of incremental reach, over-the-top/streamed video ad costs are also on the rise. The World Federation of Advertisers (WFA) has forecast that prices for advanced TV formats in the U.S. will rise 9.9% this year.

Budget shifts have mostly favored video and other digital media, despite generally lower levels of inflation in offline media.

In the U.S., radio prices have remained basically flat since 2019, and out-of-home (across traditional and digital) prices are 5.8% lower than in 2019.

“As the global economy teeters on the brink of an inflationary recession, media costs may experience further volatility,” but “non-video channels are worth consideration if they are right for the audience,” said Alex Brownsell, head of content, WARC Media.