Survey: 72% Of Netflix Users Not Interested In Switching To Ad-Supported Version 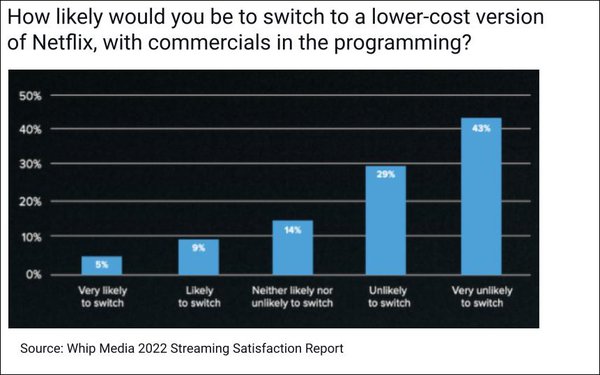 In a finding that could be read as either positive or not-so-positive, 72% of Netflix users who participated in Whip Media's latest Streaming Satisfaction Survey indicated that they are unlikely or "very" unlikely to switch to such a lower-cost version.

For the report, enterprise software platform and data provider Whip Media surveyed 2,460 U.S. users of its movie-tracking TV Time app (18 to 54 years old) from April 29 to May 4. Results were weighted to balance with the US general population by gender and age. The TV Time app claims more than 1 million users.

The results are from a limited sample of people unusually involved in streaming content, with no way of knowing at this pre-launch stage what an ad-supported version would be like.

On the other hand, the same survey tends to confirm an increase in Netflix cancellations in the U.S., apparently driven by price increases and a perception of lower value than was found in last year's Whip Media survey. (See Video Insider for more on the survey's findings.)

avod, netflix, research
4 comments about "Survey: 72% Of Netflix Users Not Interested In Switching To Ad-Supported Version".
Check to receive email when comments are posted.
Read more comments >
Next story loading