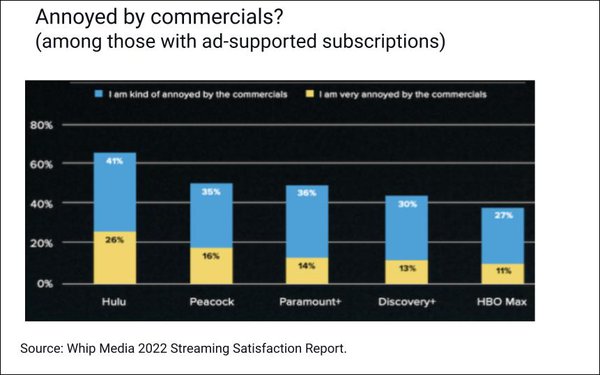 HBO Max easily leads the industry in overall customer satisfaction, while satisfaction with Netflix has dropped from first to fourth place since last year, according to the latest Streaming Satisfaction Report from Whip Media. 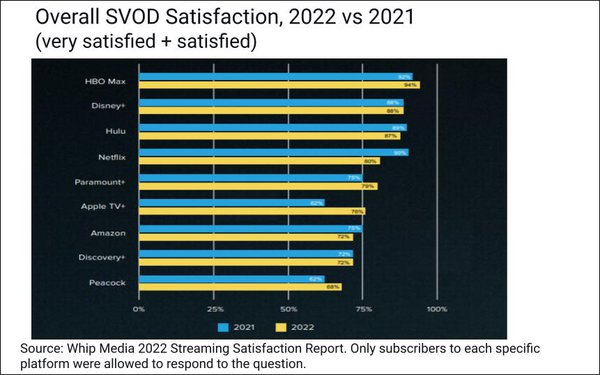 HBO Max’s $9.99 ad-supported tier also gets the highest marks among the major ad-supported video-on-demand (SVOD) services, with 92% expressing satisfaction with it, compared to 95% saying the same about the ad-free version. Further, it has the lowest advertising annoyance levels, with 38% saying they are somewhat or very annoyed (chart at top of page).

Hulu with ads has the highest annoyance level (67%), but still has the second-highest satisfaction rating, while Discovery+’s with-ads version has the lowest.

“Hulu’s ad loads are known to be heavier than most in the industry and our results show that viewers have noticed,” notes the report. “HBO Max was the only service that users reported feeling the amount of commercials was less than expected. Their ad loads are very low at only 4 minutes per hour and HBO originals on the ad-supported tier do not carry any commercials.” Hulu users also said they feel the service shows the same ads too frequently compared with other services. 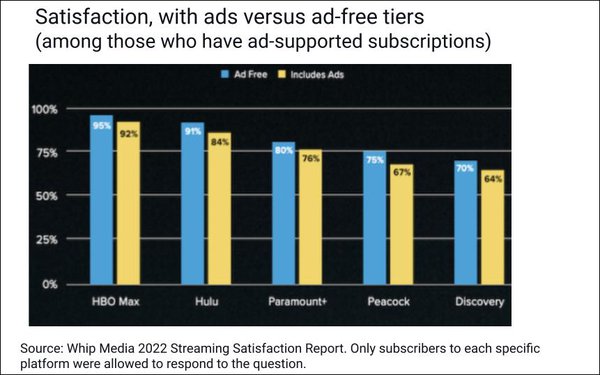 HBO Max was also No.1 in overall customer satisfaction in last year’s survey, but it expanded its lead by two points this year, with 94% of respondents saying they’re “satisfied” or “very satisfied” with the service.

Netflix, which ranked a very close second on customer satisfaction in 2021, this year declined by 10 points, to 80% — the most significant decline in the survey.

Apple TV+ made by far the biggest gains in customer satisfaction in 2022, with a 14-point surge helping it jump ahead of Amazon Prime Video, Peacock and Discovery+.

While Netflix remains the most indispensable service, with 31% of subscribers saying they would keep the service if they could only have one SVOD, that was a 10-point drop from 2021, while HBO Max and Disney+ both made gains versus 2021. 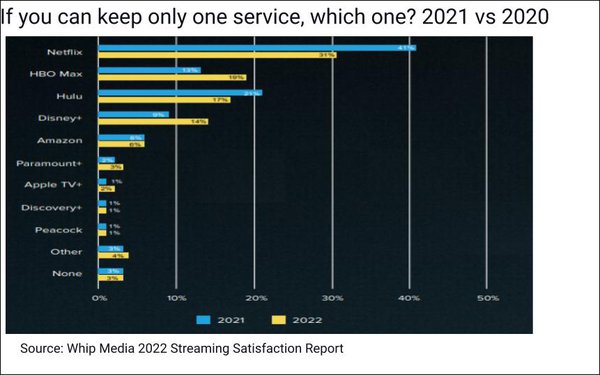 However, Netflix ranks last in the industry on perceived value (and highest on dissatisfaction, at 20%), and dropped from first in 2021 to fourth this year in users’ likelihood to keep the service (down 12 points). 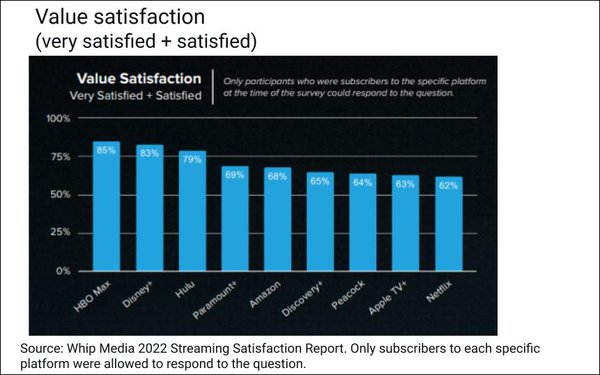 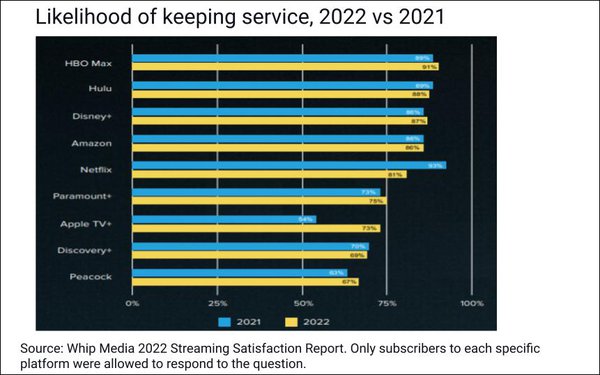 Netflix also has the highest user-reported level of cancels — up 12 points versus last year, to 68%. Its decision to increase prices earlier this year was the reason cited by most customers (69%), followed by “not getting enough value from it” (55%). The second-highest level of reported cancels was just 13%, for Apple TV+.

Reported HBO Max cancels were among the lowest, at 6% (tied with Amazon Prime Video), and “not enough value” was the top Max cancellation reason, at 48%. Discovery+ had the lowest reported cancels. 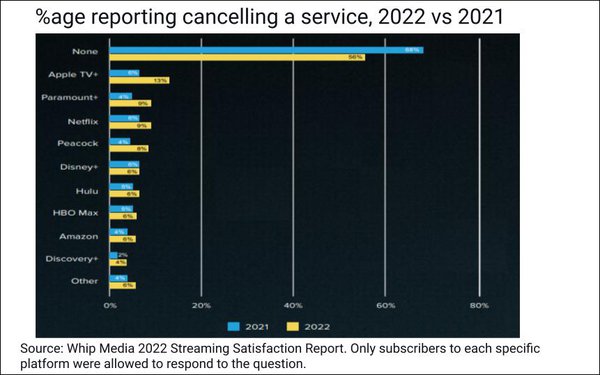 "Despite its well-reported subscriber losses, and declines in satisfaction, Netflix is still in a healthy position,” observes the report. “Its satisfaction scores for both quality and variety of original and library series remain strong. Its user experience is the best of all the SVODs. However, its service is now generally priced higher than its competitors (depending on the tier), and the competitors also have highly regarded content. [Netflix] will continue to need compelling shows to compete, and they might want to do additional seasons of their hits more frequently, a strategy they’ve often shunned. That will help build their library and, maybe, prevent churn.”

As for Netflix’s plan to launch an ad-supported tier, these respondents, at least in this pre-launch stage, expressed little enthusiasm. (See related news item.)

Meanwhile, rival services including HBO Max and Disney+ "have solidified their already favorable positions in consumers’ minds, and at lower price points than Netflix’s, and Apple TV+ has made the greatest gain in satisfaction, built on the success of its original series, though it still trails most of the SVODs in overall satisfaction," the report sums up.

For the report, enterprise software platform and data provider Whip Media surveyed 2,460 U.S. users of its movie-tracking TV Time app (18 to 54 years old) from April 29 to May 4. While these respondents may be more somewhat more heavily involved in streaming than the average consumer, results were weighted to balance with the U.S. general population by gender and age. The TV Time app claims more than 1 million users.