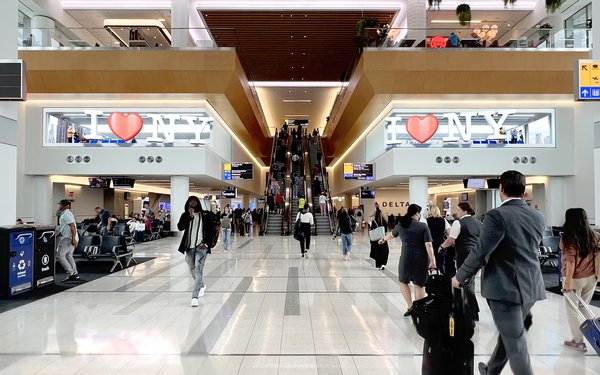 The Port Authority and Clear Channel signed a 12-year contract in November 2020 for the ad franchise at all Port Authority airports. That upgrade covers JFK and Newark airports, which comes later this year, as well as Stewart. More than 95% of the investment went to digital displays.

LaGuardia’s Terminal B was upgraded earlier in 2022.

Terminal C features numerous additions, including two 50+ foot-wide head-on, 90-degree corner LED soffits, the largest digital asset CCA has ever installed in an airport. There is also a network of 98-inch ultra-high-definition displays on the way to and from piers.

The recovery in air travel is creating new audiences for airport advertising.

John Moyer, SVP of development and operations, Clear Channel Airports, noted the company was replacing all existing ad displays with larger, more state-of-the-art signage tech. “This is to transform the entire advertising program across all PANYNJ airports to be a world-benchmark setting.”